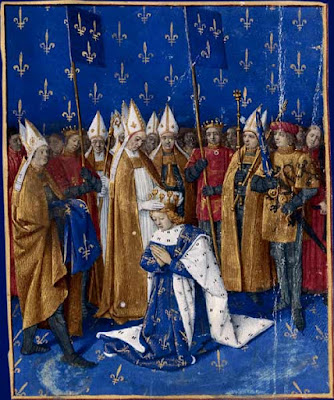 Eric Jager's Blood Royal: A True Tale of Crime and Detection in Medieval Paris (2014) is a good book. I am having trouble keeping my review positive, though, because it starts out as a great book, and I hoped it might measure up to his last, excellent book, The Last Duel. Sadly, it does not. But anyway it is still quite good, and I recommend it.

In November, 1407, Louis d'Orleans, the brother of King Charles VI, was hacked to death by assassins in the streets of Paris. Charles VI was the famous King of Glass, and Orleans had been the leader of the government during the king's bouts of madness. His murder was therefore a matter of the highest significance for France.

The job of investigating the murder and identifying the culprit fell to Guillaume de Tignonville, the provost of Paris. Jager begins his book focusing on de Tignonville, using chronicles and also a remarkable chance survival from the medieval records: the scroll on which de Tignonville's scribes recorded the progress of the investigation as it unfolded. This scroll was found in the private collection of a noble family in the 1660s, no doubt because one of their ancestors had seen the value of the thing and purloined it. As Jager tells the story, de Tignonville went about solving the case in a very modern way. While he inspected the body, he sent men to search the house rented by the assassins and others to interview all the neighbors. Once he had established which way the assassins fled he sought witnesses on each successive block, tracing the killers' route through the city toward their safe house.

Jager also has a great eye for what makes medieval history weird and interesting. He takes us on a tour of the old castle known as the Châtelet that had become the Paris prison, a frightening place where accused criminals were often tortured to extract confessions. All the cells in the prison were named, from the well-lit rooms on the upper floor where aristocratic prisoners could have sumptuous meals brought in for themselves and their visitors (the Good View, the Little Glory) to the horrible pits in the basement into which the most abominable murderers and traitors were lowered by rope (the Hole, the Well, the Gourdaine). He stages a scene at Montfaucon, the execution place of Paris, where the huge gibbet stood that could accommodate more than fifty men. He has some marvelous scenes set in the gloomy, paranoid court of the mad king, where accusations of sorcery and poisoning were a routine part of the struggle for influence. 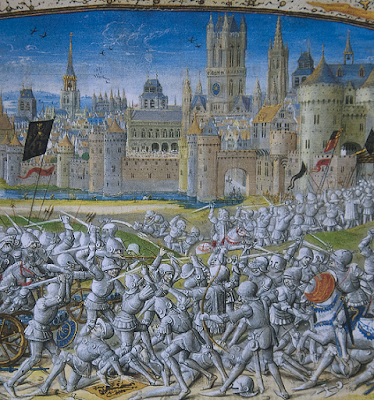 The problem Jager faces is the story, which gets a lot less interesting as it goes on. The assassination was ordered by one of France's greatest nobles, the king's cousin, and from Parisian crime the matter quickly escalated to an affair of state. The civil war that resulted is a far bigger story than can be told in a book such as this; in fact that civil war set the stage for Henry V's invasion of France, Agincourt, and fifty more years of the Hundred Years' War. Jager, whose expertise is in the microhistory of particular, revealing events, cannot begin to cope with all of this.

But the first half of the book is excellent, and the rest is ok, Jager is a very accurate historians and a good writer. So if you are looking to spend a few hours in medieval Paris, get a copy of Blood Royal from the library and curl up in your coziest chair.
Posted by John at 10:24 AM