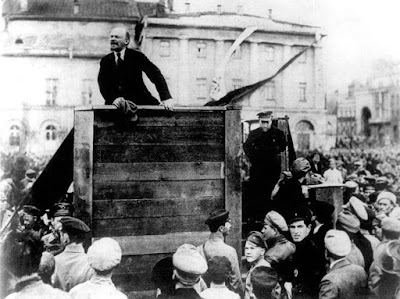 Bernie Sanders loves to talk about "revolution." We need, he keeps saying, a revolution in America. Ordinary politics is not working, he says, because "We have a campaign finance system that is corrupt, we have super PACs, we have the pharmaceutical industry pouring hundreds of millions of dollars into campaign contributions and lobbying." Congress, the Supreme Court, and the Presidency have been "purchased" by billionaires. Etc. Asked by skeptics like me how he is going to get anything passed over opposition from all Republicans and quite a few Democrats, he says, "we're going to have a revolution."

But Sanders doesn't really want a revolution. A revolution means the Socialist Workers' Militia would raise ten million men and launch a paramilitary March on Washington, where they would proclaim Bernie the Supreme President, arrest the Supreme Court, dismiss Congress, torch a few buildings, and then proclaim a new provisional constitution by voice vote Of the People. Counter marches by Tea Party supporters would be forcibly broken up, and all Tea Party leaders arrested.

That's how to stage a revolution.

So far as I can tell, Bernie Sanders wants nothing of the kind. He wants to keep the Constitution, including Supreme Court review, allow the Republican Party to keep putting up candidates, allow Tea Party web sites to keep spreading slanderous attacks on Democrats. All of which means that he will never, ever get most of the policies he says he wants.

There is a gross misalignment between his aims and rhetoric on one side and the methods he is willing to use on the other. Ordinary politics is not revolutionary. Ordinary politics is, as Max Weber famously put it, "a strong and slow boring of hard boards." So far as I can see, Sanders has no interest in that sort of work. He just wants to click his ruby slippers and have a magical, bloodless revolution. Look, Toto, we're back in the New Deal. Whether he wins or loses the election, it will not happen.

That is why I prefer Hillary. She may be uninspiring, and maybe America could really use more revolution than she will provide. But she will do the work, and Sanders won't.
Posted by John at 9:33 PM