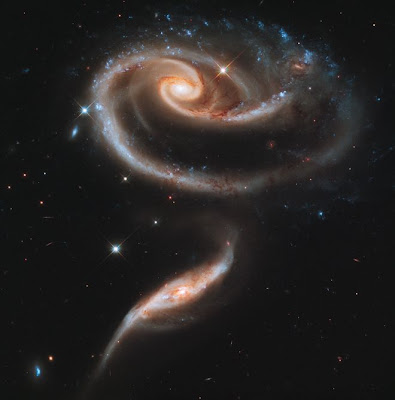 The Hubble Space Telescope has been orbit for 21 years, a number that astonished me; in my mind the famous mission to repair its faulty optics seems like it happened just a few years ago. In celebration of the anniversary NASA released this wonderful photograph of the linked galaxies known as Arp 273.

Really the first servicing mission to the Hubble was in December, 1993. Since then few things have given me as many hours of happiness or moments of wonder as the Hubble Telescope, so I join the world in offering my congratulations to the people who built and launched this astonishing wonder.
Posted by John at 8:59 AM