I Suspected as Much 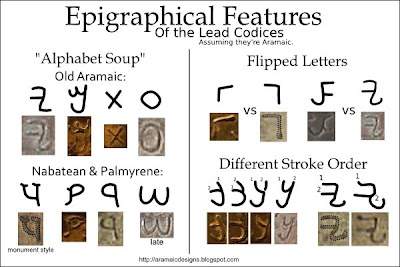 The story of the lead codices that recently turned up in Israel triggered my fraud detectors as soon as I read about it, and now an expert has stepped forward to say they can't be genuine. Aramaic translator Steve Caruso, via LiveScience:

I obtained photos of all the text that was available, and spent the past week looking over them. I noticed there were a lot of Old Aramaic forms that were at least 2,500 years old. But they were mixed in with other forms that were younger, so I took a closer look at that and pulled out all the distinct forms that I could find. It was very, very odd — I've never seen this kind of mix before.

While some of the letter forms date to 500 BC, others date to AD 200 to 300. Other letters are flipped, which sometimes happens when a scribe who doesn't know the language is copying from a model.

The image they are saying is Christ is the sun god Helios from a coin that came from the island of Rhodes. There are also some nonsense inscriptions in Hebrew and Greek.

Which sets me musing on the perils of fraud. Fraudsters almost always make mistakes. But what if they didn't? What alleged ancient treasures in our museums are really the products of some cynic's contemporary workshop?