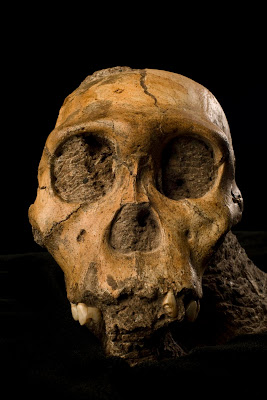 The bones of Australopithecus sediba were uncovered in South Africa in 2008. They date to between 1.78 and 1.95 million years ago. Detailed analysis of the fossils was presented last year, and they are intriguing. A. sediba had a small brain, at the lower end of the australopithecene scale, but its pelvis closely resembled those of genus Homo; in this case, at least, the animal was fully bipedal with a chimp-sized brain. Analysis of the brain cavity suggests that though the brain was small, it was organized like that of a modern human, with outsized frontal lobes. Could the frontal lobes of our ancestors started to grow before the brain as a whole? It seems odd, but who knows?

The picture presented by the fossils from this period gets more complex with each new discovery. Rather than a straight progression from something ape-like to something human, what we see is a riot of experimentation, with dozens of different species emerging and disappearing. These bipedal apes were highly successful and spread across Africa, occupying forests and savannas. At some point one of those species evolved into the earliest humans, but we are a long way from figuring out which species that was, let alone why or how.
Posted by John at 7:11 AM