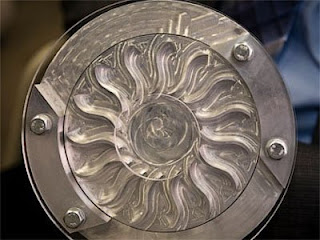 The engine has a rotor that's equipped with wave-like channels that trap and mix oxygen and fuel as the rotor spins. These central inlets are blocked off, building pressure within the chamber, causing a shock wave that ignites the compressed air and fuel to transmit energy.

The Wave Disk Generator uses 60 percent of its fuel for propulsion; standard car engines use just 15 percent. As a result, the generator is 3.5 times more fuel efficient than typical combustion engines.

If this works even half that well, it will make inventor Norbert Müller the next Henry Ford. More at Wikipedia and New Scientist.
Posted by John at 7:28 PM