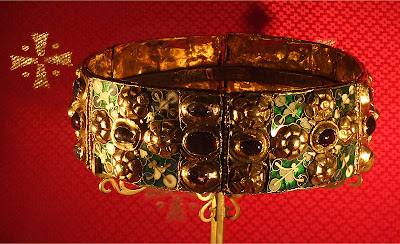 The most famous king of the Lombards was Alboin, who led their invasion of Italy in AD 569. His story was rendered by historian Paul the Deacon as a little saga in the mode of the Nibelungenlied. Before the invasion, when the Lombards lived in modern Hungary, they fought a great battle against the Gepids and their king Cunimund:

In this battle Alboin killed Cunimund, and made out of his head, which he carried off, a drinking goblet. This kind of a goblet is called among them “scala,” but in the Latin language “patera.” And he led away as a captive Cunimund’s daughter, Rosemund by name, together with a great multitude of both sexes and every age, and because Chlotsuinda [her husband] had died he married her, to his own injury, as afterwards appeared.

Alboin and Rosemund got along well enough for the next decade, the period of the invasion of Italy and other extraordinary events, and they had at least two children.

After this king had ruled in Italy three years and six months, he was slain by the treachery of his wife, and the cause of his murder was this: While he sat in merriment at a banquet at Verona longer than was proper, with the cup which he had made of the head of his father-in-law, king Cunimund, he ordered it to be given to the queen to drink wine, and he invited her to drink merrily with her father. Lest this should seem impossible to any one, I speak the truth in Christ. I saw king Ratchis holding this cup in his hand on a certain festal day to show it to his guests. Then Rosemund, when she heard the thing, conceived in her heart deep anguish she could not restrain, and straightway she burned to revenge the death of her father by the murder of her husband.

No doubt Alboin was drunk at the time, but still, not a very smart move. Rosemund seduced the king's armor bearer, Helmechis, to get him to perform the assassination -- her part was to secure the king's sword and then let the assassins into the bed chamber -- and then she and her lover fled to the territory of the Byzantine Empire at Ravenna. There the Imperial Prefect suggested to Rosemund that she do away with Helmechis and marry him, and she agreed, so she carried a cup of poisoned wine to Helmechis in his bath. He drank the wine but realized he was poisoned, grabbed Roseumnd and drowned her in the bath before he expired.
Posted by John at 10:05 AM