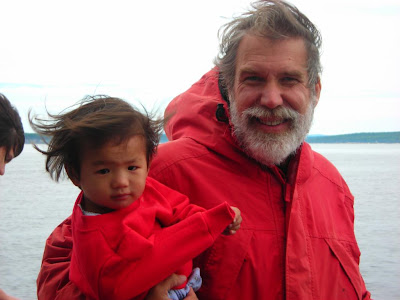 In New York right now a woman is suing to have her mother's husband's name removed from her birth certificate, because he was not, as she now knows, her biological father. She is doing this because she wants to claim part of the fortune of the man she says was her "actual" father.

I say, to hell with the notion that a man who just contributes sperm is anybody's father.

I say this believing that much of who we are is genetic. Watching my own biological children grow I often see eerie echoes of myself; my second son has my attitude toward authority, my love of disappearing into imagined worlds, my ears, and my feet. He was born that way, so far as I can tell, and some of the things he inherited from me would have come out eventually no matter who raised him.

Those inherited traits may be important, but they do not make me his father. What makes me his father is all the time I have spent raising him: feeding him, reading to him, taking him into the woods to look for frogs, fighting with him about doing his homework and cleaning his room. Fatherhood is an emotional investment (and a financial one), not a accidental fusion of cells.

I think about this often partly because I have an adopted child as well as the four biologicals. The notion that someone else is Clara's father, someone who abandoned her when she was a week old, enrages me. I have been preparing myself since we first conceived the notion of adopting for the moment when she decides to learn about her "real" parents, and wondered if she would do this in a spirit of anger and rebellion, or embarrassed curiosity. At the moment Chinese law makes this a futile endeavor, but this might change, and one day she might well find some other "parents" in a little Chinese town. I understand the pull of that curiosity, and I do not dismiss it. The people who gave her her genes did shape her as profoundly as I will.

But to me that has nothing to do with being anyone's father. Fatherhood is a relationship with the child. If you don't have one, you are not that child's father. The person in China that I think has a claim on Clara's affections is her foster mother, who raised her for a year and gave her a loving start in life. Not someone who sired and then abandoned her.

My argument here is not just about emotion, but about law. I don't think the law should in any way acknowledge sperm donors as fathers. It is the man who puts in the work who is the father. I realize that not every situation is so simple, and that some children have several men in and out of their lives. But when courts have to adjudicate these things, they should be thinking about relationships, not DNA.
Posted by John at 7:41 AM

Very much sharing your thoughts here. I think I would count myself a failure as a parent if my daughter grew up and wanted to "remove us" as her parents so late in life, for such a poor reason. I fully expect she'll want to get rid of us when she's a teenager.