Celts to Vikings XIX: Thinking About a Familiar Map 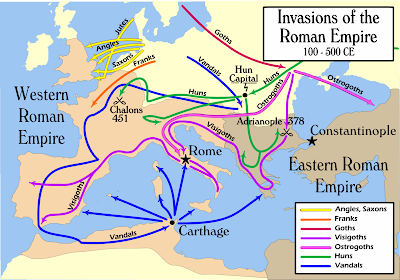 If you have ever studied European history, you have surely seen some version of the map above. It shows the movements of the barbarian groups who entered the Roman Empire in the fifth century. I find that my students are numb to what it implies, so I like to spend some time going over the human reality of those neat colored lines. Think about the blue line that shows the Vandals moving from central Germany toward the southeast, then west into the Empire, across Gaul to Spain, and then to North Africa, from which lines shoot out across the Mediterranean Sea. Imagine a man born along that line in about AD 390, along the frontiers of the Roman Empire in modern Hungary. He would have spent his boyhood in unsettled times, perhaps moving several times, always threatened by hunger and violence. As he became a teenager his people began a great migration, tens of thousands of them loading all their belongings into wagons, or onto their backs, and moving toward the west. For the next few years they skirted the Roman frontier, skirmishing, searching for food, begging admittance to the promised land beyond the frontier. In the winter of 406 the crossed the frozen Rhine River and began their invasion of the empire. Imagine the emotions that accompanied that fateful day -- the hope of safety and wealth, the fear of battle and annihilation, the cold and the hunger and the dread of cracking ice. The Vandal leaders tried to negotiate a grant of land along the Rhine frontier, but the local Roman authorities persuaded them to keep moving. For three years they traveled ever onward across Gaul, stopping at various places for a few months. They were able to extort enough food and fodder to keep going, but city gates were closed against them and they never knew when some general or governor would raise an army to destroy them. Surely suspicion and fear dogged those years.

In 409 they reached Hispania, where whole provinces were handed over to the Vandal leaders. Here they tried to settle down, ruling over people who probably hated and despised them, claiming some land as their own. Some of the migrants merged with the population and became farmers. But in 420 the Visigoths came to Spain to claim the land for their own, and they defeated the Vandals and their allies in a major battle. Those people who still identified with the Vandal kingdom packed up and moved on again -- 80,000 of them, according to the Byzantine historian Procopius. They crossed to North Africa and marched along the coast, shut out of cities until they took some by siege. By 422 they had founded a new Vandal kingdom centered on ancient Carthage. Imagine how strange this land seemed to people born in the German forests. And then, seeing an opportunity, they became pirates and raided by ship around the Mediterranean Sea. Perhaps our young Vandal, by this point grown to manhood, finished his military career as captain of a pirate ship, or perhaps he was killed in an attack on Sicily or Corsica. His children, born in Spain or Africa, knew the land where their father was raised only in stories. They grew up Vandals amidst Roman Africans, sojourners among people who hated them and longed for a Roman emperor to come and drive them out. They kept their Vandal identity for a century -- their language, their Arian church, their sense of themselves as vigorous outsiders destined to rule over corrupt Romans.

Those lines are the trajectories of people's lives, and they trace out the extraordinary destinies lived out by many thousands of people in that disordered age.
Posted by John at 7:53 AM