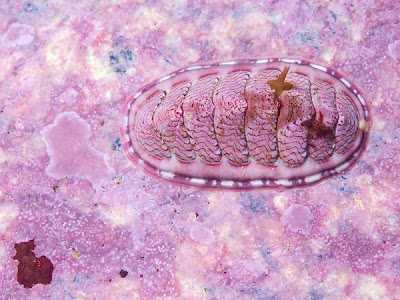 One of the examples sometimes used by creationists to attack evolution is the eye, as in, "what good is 10% of an eye?" Actually, 10% of an eye is very useful. Consider the Indian Fuzzy Chiton (Acanthopleura granulate), a shelled mollusc native to the Caribbean. This creature has nodules of clear mineral on its shell, like small rocks, and there has long been speculation that these are primitive eyes. Recent research confirms this:

When left alone, a chiton will lift part of its oval-shaped body to breathe. But when threatened, the animal will clamp down tightly on the seafloor to protect its soft underbelly.

In the lab, the scientists placed individual animals on a stone slab beneath a white screen, which could change colors. Once the chitons seemed relaxed, the team either placed a black disk directly above the mollusks or changed the color of the background screen from white to gray.

The black disk was designed to simulate a suddenly appearing predator, while the dimming screen mimicked subtle changes in natural light that chitons might experience in the wild—for example, when a cloud passes in front of the sun.

In the experiment, the chitons went into lockdown mode when shown the black disk, but the animals remained at ease when the screen dimmed. This suggests the chiton's eyes are able to distinguish shapes, a prerequisite for true vision.

"The eyes allow the chitons to see objects—not with much detail—but they can distinguish between approaching objects and just decreases in light," Speiser said.

Speiser estimates chiton vision is about a thousand times coarser than human vision, and it's likely they see only in black-and-white.