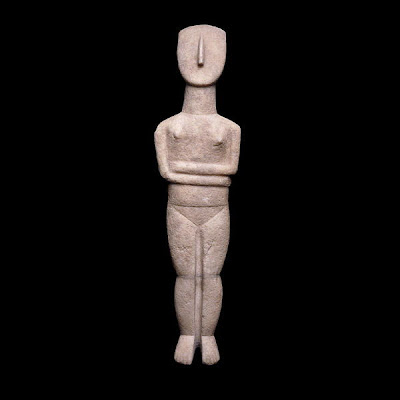 Among the wonderful products of Bronze Age civilization are the stone figurines of the Cyclades. These small Greek islands were rich in mineral resources -- copper, lead, obsidian, marble -- and they hosted a thriving civilization with widespread trading links. Yet their art looks like nothing else. The earliest figurines, dating to around 3200 BC, do resemble Neolithic art of Anatolia, but as the style developed it became more and more unique. 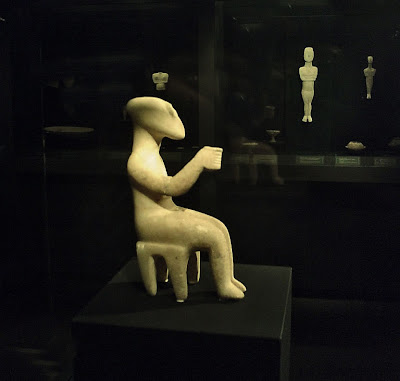 The spare, modernist look of the statues is partly an artifact of time, since they were brightly painted. Most were made between 2800 and 2200 BC. 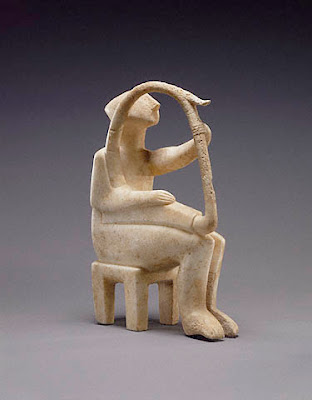 I have to say, though, that I have always wondered if some of the more elaborate pieces weren't modern fakes. Marble sculpture is all but impossible to date, and these pieces appealed so strongly to modernist tastes -- Freud was a big collector -- that there was a thriving trade in them throughout the early 20th century. Recent discoveries of harp players in good archaeological contexts, though, show that even if some pieces were made recently, they are copies of truly ancient works.

The figurines were (of course) once interpreted as religious idols, and some have been found in graves. Many, though, come from trash dumps, suggesting that they were toys or decorations rather than sacred objects.
Posted by John at 7:23 PM