Corpses in the Ditch 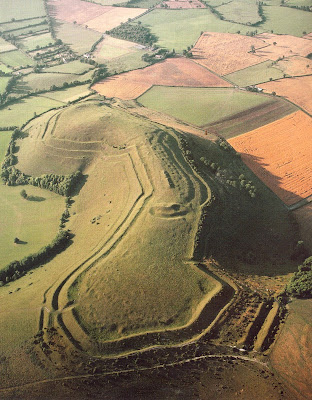 Northwestern Europe is dotted with earthen constructions that our medieval ancestors called "castles," but were re-christened by Victorian archaeologists "hill forts." For puzzling reasons having to do with the mindset of twentieth-century anthropology, there has been a movement among archaeologists to insist that these Iron Age structures were not forts at all. Insisting that the "forts" were not really defensible, archaeologists have argued that they were livestock corrals, or ritual enclosures, or gathering places where dispersed tribes met on an annual basis. It always struck me that the medieval people who dubbed them "castles" knew a whole lot more than we do about what was really defensible in the Iron Age, but the impulse to overturn the received wisdom is very strong in modern science. Add that to the turn among anthropologists away from tribal warfare as an explanation for everything, and toward ordinary life and economic themes, and an insistence that hill forts were not military constructions was all but inevitable. But consider the new evidence from Fin Cop in Britain:


A burial site contained only women and children - the first segregated burial of this kind from Iron Age Britain. Nine skeletons were discovered in a section of ditch around the fort at Fin Cop in the Peak District. Scientists believe "perhaps hundreds more skeletons" could be buried in the ditch, only a small part of which has been excavated so far.

Construction of the hill fort has been dated to some time between 440BC and 390BC, but it was destroyed before completion. The fort's stone wall was broken apart and the rubble used to fill the 400m perimeter ditch, where the skeletons were found. A second, outer wall and ditch had been started but not finished.

No doubt is possible to explain this as some sort of ritual event, but the obvious intepretation is the one suggested by the excavators:

The findings provide a rare insight into warfare in pre-Roman Britain, according to Dr Clive Waddington of Archaeological Research Services, who directed the excavations.

"There has been an almost accepted assumption amongst many archaeologists that hill forts functioned as displays of power, prestige and status and that warfare in the British Iron Age is largely invisible," he said.

"For the people buried at Fin Cop, the hurriedly constructed fort was evidently intended as a defensive work in response to a very real threat."

The British press is portraying the discovery as "overturning our assumptions," an interesting case study in how quickly a new idea can become an entrenched orthodoxy. The "New Archaeology" didn't exist until after 1960, but already it seems to have penetrated deeply into the consciousness of ordinary Brits:

Ann Hall of Longstone history group said: "Locals have always viewed the hill as a peaceful spot. Now we have uncovered sad evidence of an ancient massacre and learned that our well-loved landmark may also be a prehistoric war grave".

Yes, the locals have thought of the spot as "peaceful" for so long they are surprised to discover that something that looks like a fortress may actually have been one.
Posted by John at 5:48 AM