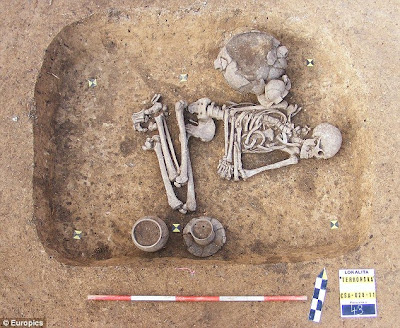 Sometimes it takes a great deal of effort to unpack all the errors in a single short statement. Case in point, this classic from the Daily Mail:

Five thousand years after he died, the first known gay caveman has emerged into the daylight.

Let's start with the date: 5,000 years ago the people of central Europe were not cave dwellers, but neolithic villagers. Even NPR used this horrid "caveman" line.

And then to the interesting part, the gender anomaly:

The skeleton of the late Stone Age man, unearthed during excavations in the Czech Republic, is said to date back to between 2900 and 2500 BC. During that period, men were traditionally buried lying on their right side with the head pointing towards the west; women on their left side with the head facing east.

In this case, the man was on his left side with his head facing west. Another clue is that men tended to be interred with weapons, hammers and flint knives as well as several portions of food and drink to accompany them to the other side.

Women would be buried with necklaces made from teeth, pets, and copper earrings, as well as domestic jugs and an egg-shaped pot placed near the feet. The ‘gay caveman’ was buried with household jugs, and no weapons.

Such gender mismatches are quite fascinating, but whether they equate to "homosexuality" in our terms is a hard question. First, a caution; the identification of sex in 5,000-year-old skeletons is not 100% accurate, and I would not consider a single example proof of this. However, that pelvis does look pretty well preserved, and since I think such practices were widespread I am willing to accept this conclusion for now. But if this is a man buried as a woman, he was probably a full-time, life-long transgendered person in the "Berdache" or "Two Spirit" mode. That is, he probably lived his whole adult life as a woman, dressing and acting as a woman and living within the woman's sphere. Is that the same as being gay? 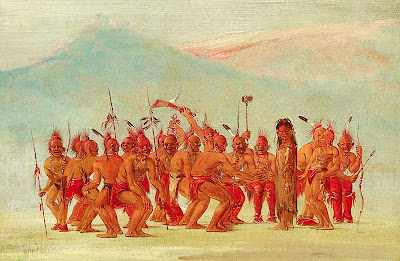 (Goerge Catlin's Dance to the Berdache, 1835-1837)
If there is an underlying, genetic program that makes some people homosexual, then presumably it existed in neolithic times as well, and I suspect that most of the people who chose to live as the other sex had those genes. But this is hardly conclusive, and we know of other reasons why people cross-dressed; for example, it was common among Siberian shamans, perhaps as a way of emphasizing that they were outside the normal rules of society. The lives of cross-gendered people in a neolithic world would have been very different than anything we think of as gay, and they would have understood their "orientation" very differently. To take just one example of the possible differences, most societies have considered only passive male homosexuality to be an aberration, and not given much thought to the active role -- straight men will do anybody, in this model, and only being done is gay.

As a further complication, there are also American Indian societies in which some men dress as women all the time while leading masculine, heterosexual lives.

So I think to call a man buried as a woman "gay" involves a lot of question begging. And this is too bad, because such a discovery might be a "news hook" that an organization like NPR, the BBC or the Times might use to offer us a brief introduction to a fascinating topic in anthropology.
Posted by John at 10:16 AM