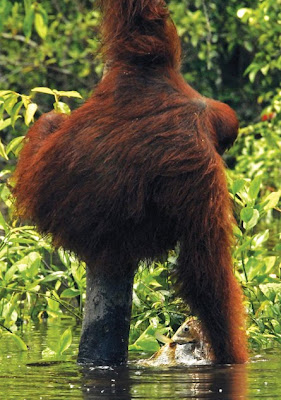 Orangutans living in Borneo scavenge fish that wash up along the shore and scoop catfish out of small ponds for fresh meals, anthropologist Anne Russon of York University in Toronto reported on April 14 at a meeting of the American Association of Physical Anthropologists. Over two years, Russon saw several animals on these forested islands learn on their own to jab at catfish with sticks, so that the panicked prey would flop out of ponds and into a red ape’s waiting hands.

As Russon notes, if Orangutans can fish, surely early hominids could, too.
Posted by John at 10:32 PM