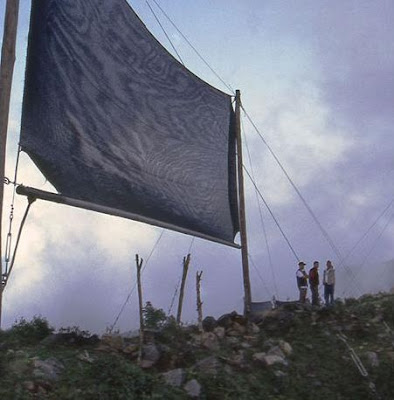 In the arid Namib Desert on the west coast of Africa, one type of beetle has found a distinctive way of surviving. When the morning fog rolls in, the Stenocara gracilipes species, also known as the Namib Beetle, collects water droplets on its bumpy back, then lets the moisture roll down into its mouth, allowing it to drink in an area devoid of flowing water.

What nature has developed, Shreerang Chhatre wants to refine, to help the world's poor. Chhatre is an engineer and aspiring entrepreneur at MIT who works on fog harvesting, the deployment of devices that, like the beetle, attract water droplets and corral the runoff. This way, poor villagers could collect clean water near their homes, instead of spending hours carrying water from distant wells or streams. . . .

A fog-harvesting device consists of a fence-like mesh panel, which attracts droplets, connected to receptacles into which water drips. Interest in fog harvesting dates to the 1990s, and increased when new research on Stenocara gracilipes made a splash in 2001. A few technologists saw potential in the concept for people. One Canadian charitable organization, FogQuest, has tested projects in Chile and Guatemala.

How well does it work?

In some field tests, fog harvesters have captured one liter of water (roughly a quart) per one square meter of mesh, per day. Chhatre and his colleagues are conducting laboratory tests to improve the water collection ability of existing meshes.

FogQuest workers say there is more to fog harvesting than technology, however. "You have to get the local community to participate from the beginning," says Melissa Rosato, who served as project manager for a FogQuest program that has installed 36 mesh nets in the mountaintop village of Tojquia, Guatemala, and supplies water for 150 people. "They're the ones who are going to be managing and maintaining the equipment." Because women usually collect water for households, Rosato adds, "If women are not involved, chances of a long-term sustainable project are slim."