The Problem with Believing the World is Just 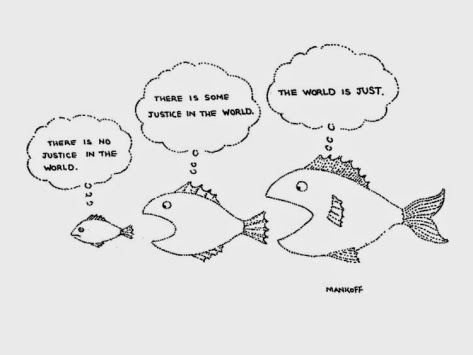 In the course of my education in ancient and medieval history I had to read all sorts of horrible stuff -- misogynist tracts, defenses of slavery, glorifications of war, calls for genocide, and so on. But what bothered me the most, intellectually, was what is called "providential history." This is history written with the idea that God is active in the world and makes sure that the good guys win and the bad guys lose. Much of the Old Testament is in this vein, and the rise of Emperor Constantine let loose another great flood of it. Even the normally judicious Gregory of Tours wrote this way about the Frankish King Clovis, who was somehow transformed in hindsight from a barbaric thug to the champion of Catholicism.

Providential history, to me, is nothing but power worship -- this set of thugs defeated that set, and therefore they must be in the right. The belief that victory is some sort of moral justification for the winners seems to be very ancient and deep-seated in our species; the winners of almost every war feel charged with righteous patriotism, the losers with self-doubt. It is a horrible habit, though. The winners in most wars are simply the ones with the most resources and the most men. God, as Napoleon once remarked, is on the side of the big battalions. Occasionally a weaker force wins through superior drive and courage, but though we tend to worship those traits they are more often found in warrior societies (Sparta, Nazi Germany) that are awful in other ways. There is simply no connection between victory and virtue.

I was just thinking about this because I have been reading about "belief in a just world," or BJW for insiders. A wide variety of studies have shown that a strong belief that the world is just leads to prejudice against losers:


People who strongly believe in a just world have been shown to be prone to blame sexual assault victims, more willing to malign people suffering from minor illnesses, less compassionate towards victims of spousal abuse. A 1975 study found BJW correlated with a tilt towards authoritarianism, an admiration for political leaders, and contempt for the underprivileged.

Believers in a just world feel less compassion for prisoners, victims of police abuse, and the mentally ill, and they are less likely to support government measures to help the poor. This is why patriotism is associated with conservatism -- if you really love your homeland you tend to believe that its rules are just rules, and therefore to oppose changing them.

The richer you are, the more likely you are to believe that capitalism is fair.

The psychological basis for these beliefs is obvious:

But to deny the injustice of the world is to perpetuate it. Only when we recognize the capriciousness of the universe can we develop compassion, which is the basis of all real morality and all political wisdom.
Posted by John at 7:31 AM

Today, providentialism is basically a winner's philosophy. But as you've often said, in the Middle Ages God was experienced as a fact, not a belief choice. This meant that, even if you lost, you had to figure out how that was part of God's plan too. Of course, the formula "for our sins" always beckoned. And if you didn't clearly identify with winners or losers, you still had to discern God's purpose. I think I've seen piety-minded chroniclers who end up saying essentially, "Well, it must be part of God's plan, but I certainly can't figure it out"--but I can't think of anyone specific at the moment.

Yesterday I did come across a nice Portuguese proverb: God writes straight with crooked lines.

Indeed medieval people were compelled to see all events in religious terms, but that didn't necessarily mean worshiping the victors. There was St. Augustine, after all, and after him plenty of moralists who tended to see all wars as devilry, or as signs that the end was approaching.