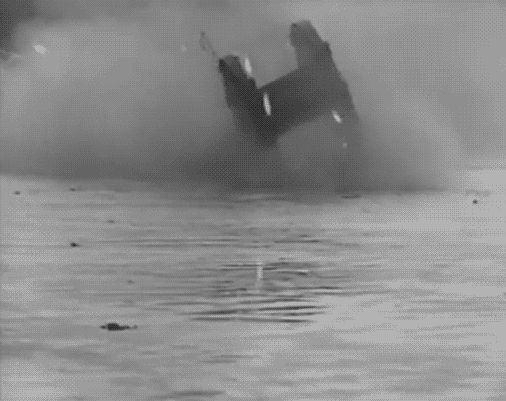 From Danger Room, the tale of one of World War II's least storied weapons:


The Panjandrum has to be one of the craziest, most explosively unsuccessful flops in modern military history. Concocted by the British as a means of breaking through formidable German defenses on the beaches of Normandy, the engineering brief reads like something out of an Acme catalog: Install a bunch of rockets on two huge wheels joined by a drum-like axle packed with explosives. Point it at the Germans, fire the rockets and get the hell out of the way. In theory, the Panjandrum would shoot across the beach at highway speeds, hit the concrete wall, and blow a hole big enough for a tank to roll through.

The Grand Panjandrum was devised by C.R. Finch-Noyes, who was also involved in those bouncing bombs the British used to attack German dams in 1943. It was developed by the Royal Navy's Directorate of Miscellaneous Weapons Development, a crew of notorious eccentrics who had lots of crazy ideas. (I think I know some guys for whom tinkering with rolling rockets and bouncing bombs would be the dream job.)

When it was finally tested in front of the military brass,


The Panjandrum hurtled from the sea at wondrous speed, sparks flying from its rockets. But then old habits kicked in. As rockets dislodged, the Panjandrum spun, and shock replaced the confidence of those attending. Generals fled for cover. The official cameraman was almost mown down. And the Panjamdrum, rockets flailing, wheels ablaze, disintegrated.

And so another great idea met reality and failed. Video here.
Posted by John at 8:08 AM