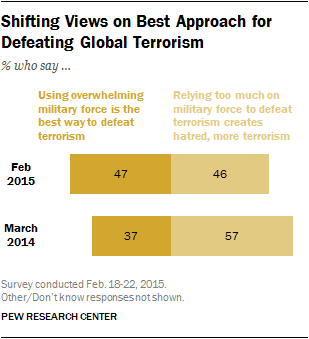 
Republican voters are hearing the war drums, and are beginning to nod their heads in time to the rhythm. That’s the conclusion one can come to reading the new poll from the Pew Research Center, which notes, among other things, an increasing eagerness among Republican voters to use ground troops in Iraq and Syria.

We are now likely to enter a cycle in which more hawkish voters lead the GOP candidates to become more hawkish in order to appeal to them, which will in turn encourage the voters to become even more hawkish because they’ll be taking their cues from the things they hear from their party leaders, and around the cycle will go.

Four months ago, 57 percent of Republicans thought we should use ground troops to fight ISIS in Iraq and Syria; that number has now gone up to 67 percent. Among the conservative Republicans who will dominate the primary contests, it’s even higher, at 71 percent. When Pew asked respondents to choose between “using overwhelming military force is the best way to defeat terrorism around the world” and “relying too much on military force to defeat terrorism creates hatred that leads to more terrorism,” last October 57 percent of Republicans chose the overwhelming military force option; that number is now 74 percent.

This may work to Hillary's advantage. She probably supports Obama's current strategy of air stirkes plus arming our allies, which seems to me more her kind of thing than sending in armored divisions. (She may be belligerent, but she is also cautious.) So she can be her real, interventionist self on this issue and still seem more moderate than her Republican opponents. Unless her opponent is Rand Paul, in which they are likely on this issue to sound exactly alike.

Incidentally I really love the question Pew came up with; I think being forced to make that choice is very clarifying. I absolutely believe that relying on military force to defeat terrorism creates more problems than it solves.
Posted by John at 5:35 AM

Terrorism is born from suffering. When people suffer terribly, but have no reasonable means of redress, they resort to violence.

Thus, terrorism - using limited resources against vulnerable targets with the intent of depleting morale rather than physical resources. By undermining the will of the opposition and its support base, the hope is to foment dissent and incite political change in favor of the suffering parties receiving redress.

Military responses to terrorism have historically failed. The IRA withstood all English military opposition, eventually becoming irrelevant and obsolete in the face of cultural and economic change. The FLQ was stymied by effective police and intelligence work, and by a decline in public support precipitated by the government's limited and measured response to the violence. And the Taliban, despite a decade and half of US military reprisal, is still in operation and where they once held power they have been replaced by even more radical factions.

You cannot fight terrorism with armies. It is a social ill that can only be stopped culturally and politically - by removing the reasons for people engaging in it.

It strikes me that to debate GOP voters on the issue of whether or not military action will work misses the point. The issue for these voters is the kind of America they want, which is a tough-guy one that doesn't hesitate to slap down uppity foreigners, and where Americans who warn that terrorism is really born from suffering (and not, say, evil) are put down and shamed.

Perhaps a better way to debate these folks is to confront them with the costs of intervention--not in human suffering, since part of their agenda is an America that doesn't worry about causing suffering--but in money. In debating Republicans, I've usually found that an offer to let them have more weapons and wars if they agree to a tax increase to pay for them, usually results in a climb-down on their part.

After all, if Americans wanted badly enough to be a real imperial power, we could restore the draft and the tax rates of, say, the 1950s, and occupy Iraq and Syria with an army of, again let's say, 5 million men for seventy years, after which we could welcome them as new US states. But that would make us Romans of the 3rd century BC, and not Americans.

Yes, David, a lot of this is about rhetoric and posturing. That's how I'm imagining the contrast between Hillary and a Ted Cruz or Scott Walker. They would be all violent bluster, which goes over well with many Republicans but might make indifferent centrists nervous. Hillary could defend a policy much like our current one and come across as sensible and moderate by comparison. And since just about all the "serious people" support something like our current policy, she also comes across as serious. Plus, as I said, I suspect that it is really the policy she supports. So I think Republican bluster allows her to take a strong position with a safe right flank.