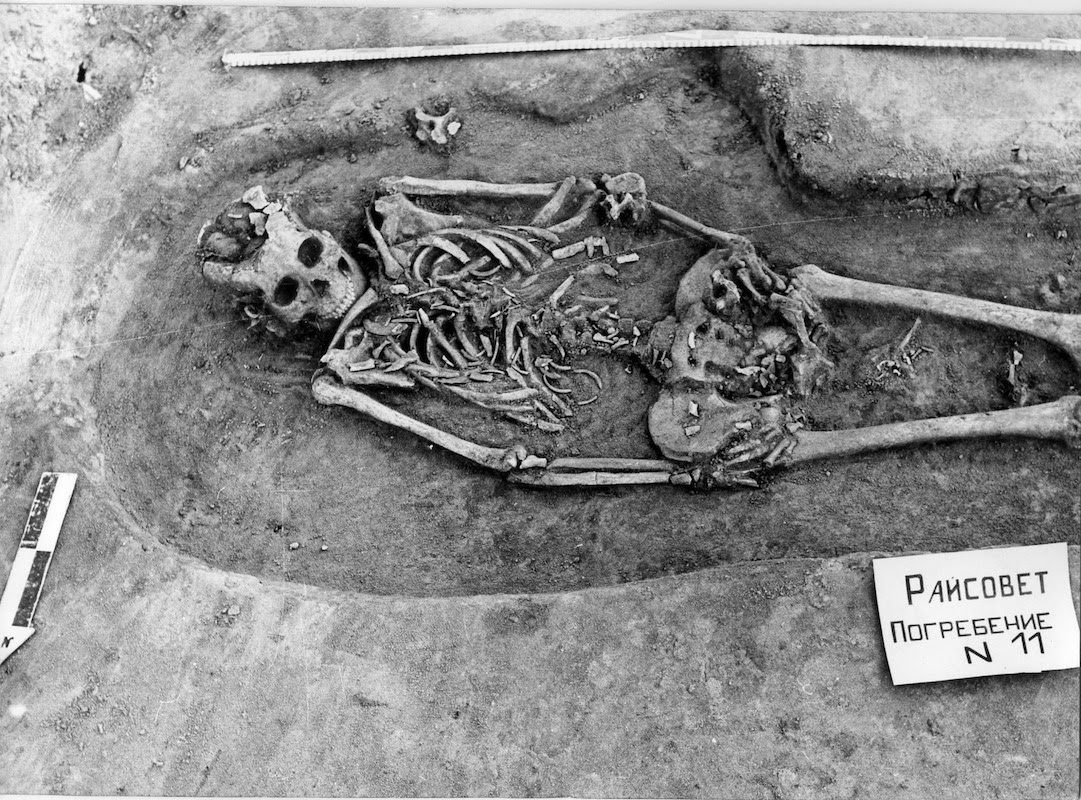 This woman died while pregnant with twins about 7700 years ago. The babies were full term, so likely she died in childbirth. The skeleton was excavated by Russian archaeologists in 1997 from a Mesolithic cemetery near Lake Baikal known as Lokomotiv. There are more than a hundred burials in the cemetery, all between 8000 and 7000 years old, so all hunter-gatherers. The presence of neonatal bones was recognized in the field, but not until years later did anyone realize that there were two sets:


The occupants of the grave in question had initially been interpreted as a mother, 20 to 25 years old, and a single child. But when Canadian archaeologist Angela Lieverse pulled out the box of fetal remains, she said she quickly realized there were duplicates of four or five of the fragile bones. . . .

The fetal bones were all found within the mother's pelvic area and between her thighs. By analyzing the original placement of the remains, Lieverse reconstructed a traumatic childbirth scenario that even today — with modern medicine and the option of a C-section — would have been risky for the mother and her babies.

It seemed that one of the twins might have been breech (positioned with its feet down) and was partially delivered, Lieverse said. The second twin was positioned with its head down and seems to have remained in the womb. Lieverse thinks the breech baby may have been trapped or locked with its sibling, leading to a fatal obstructed birth.

"It might be a bit circumstantial, but I think it's quite strong," Lieverse said of her interpretation. She added that there has been very little postmortem shifting of the bones found at Lokomotiv, and everything is in place on the mother, even her ribs and little bones in her hands.

Quite an amazing discovery, especially considering this all happened 7700 years ago.
Posted by John at 12:44 PM