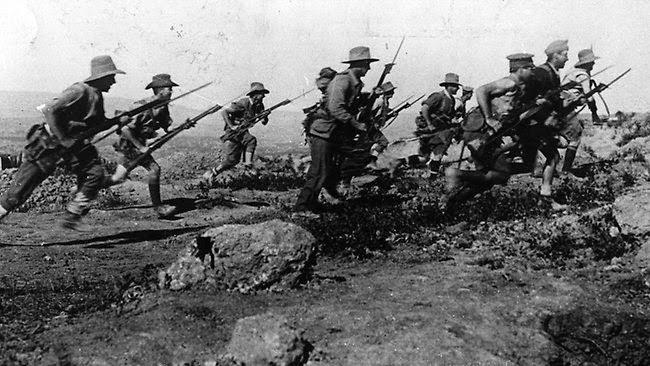 In the west, the 1915 battle at Gallipoli is remembered as a disaster, a pointless sideshow where stupid leadership condemned thousands of men to death in the trenches. In Turkey it was remembered largely because of the prominent part played in the defense by General Mustafa Kemal, who later took the name Ataturk and became the founder of modern Turkey. But now:


In recent years, though, the Turkish government has minimized Ataturk’s role in the battle—part of an orchestrated campaign to rewrite history. President Recep Tayyip Erdogan’s Justice and Development Party (AKP), a socially conservative movement with deep Islamic roots, has spun the battle as a victory for Islam. . . .

The government buses hundreds of thousands of Turks to the battlefield to present its version of Ottoman-era glory. “They are selling this as a religious victory now,” Kenan Celik tells me as we walk around the Turkish War Memorial, a monolithic archway surrounded by Turkish flags, overlooking Cape Helles at the southern end of the peninsula. “They’re telling people, ‘We won this by the hand of God,’ rather than with German help,” Celik says.

This is from an interesting article by in Smithsonian magazine by Joshua Hammer. From this I also learned that no less an authority on generalship than George Patton wrote a report on the battle for the U.S. Army, in which he concluded that the leadership provided by Kemal and German commander Otto Liman von Sanders made all the difference:


Had the two sets of commanders changed sides, the landing would have been as great a success as it was a dismal failure.

This news rather bothers me because, as I have always understood it, over time Galipoli had become sort of a shared symbol of the stupidity and senselessness of war for both Turks and Europeans, where even the victors were disgusted and horrified by the massive death toll both sides suffered.

No one really "won" the first World War. So many dead, so much suffering, all for so very little. Yet here we are, a scant hundred years hence, reimagining the senseless slaughter in more "glorious" lights. History repeats itself.

My impression was that the Turks always took the Kemalist secular-nationalist triumphalist approach, at least until the recent attempt to re-Islamize Turkey's twentieth-century history (which I had not heard of before now).

One interesting thing to note is that the "stupidity and senselessness of war" paradigm is largely that imposed on the war by the victors, mainly British and French writers and artists (with important echoes among the losers, viz. All Quiet on the Western Front, Kathe Kollwitz, etc.). This is not to say the paradigm is right or wrong, simply that it's a nice example of how counter-intuitive these things can be. (And the victors don't always write the history either; witness the way the Southern "Lost Cause" paradigm dominated US culture until the 1960s, and the way the "Wehrmacht--best army ever!" paradigm still dominates understandings of WWII.)