Scott Walker and the Mission Statement 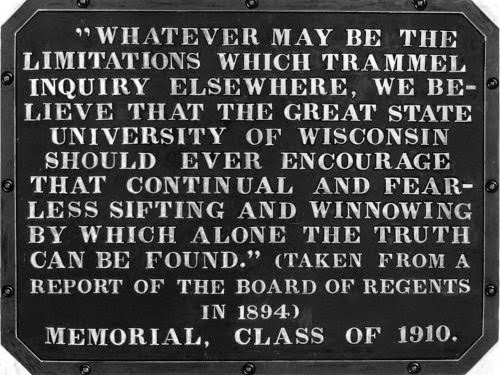 Wisconsin governor Scott Walker's proposed new budget is being read as a campaign document, designed to buff his conservative credentials. Among his proposals is a 13% cut in state funding for the University of Wisconsin system. Which I oppose, but which is not really surprising. More unusual is that he inserted a provision into the budget changing the university's mission statement from


The mission of the system is to develop human resources, to discover and disseminate knowledge, to extend knowledge and its application beyond the boundaries of its campuses and to serve and stimulate society by developing in students heightened intellectual, cultural and human sensitivities, scientific, professional and technological expertise, and a sense of purpose. Inherent in this broad mission are methods of instruction, research, extended training and public service designed to educate people and improve the human condition. Basic to every purpose of the system is the search for truth.


The mission of the system is to develop human resources to meet he state's workforce needs, to discover and disseminate knowledge, and to develop in students heightened intellectual, cultural and human sensitivities, scientific, professional and technological expertise, and a sense of purpose.

Personally I find the old version an uninspiring committee-written bit of schlock, so I am not going to get all snotty about the thought of revising it. But notice the direction of Walker's changes: out with the search for the truth, stimulating society, and reaching beyond the boundaries of the campus, in with workforce needs. Plus, calls for a "search for truth" are an old part of UW's heritage, enshrined in campus plaques like the one at the head of this post. A real conservative would have found some way to keep an echo of that language in the mission statement.

I find this revealing about Walker's character in several ways. Changing the mission statement of the university by inserting language in the budget is the sort of thing Walker has done a lot of in his tenure. He is by nature a divider, not a uniter. Where most politicians would convene a commission of gray-headed divines before making any such change, Walker just does it and dares people to contradict him. He makes no attempt to conciliate his opponents in any way. So far he has made this approach work well for him, winning two elections and solidifying Republican control of Wisconsin's government. I have personally found his success quite surprising; I thought he had gone too far by asking mild midwesterners to support Georgia-style conservatism. But I was wrong, and I will never again underestimate Walker.

Walker is not the sort of conservative who is impressed by august institutions. He seems, in fact, to have no respect for tradition whatsoever. It is hard for me to imagine him getting misty-eyed about the Capitol building, or the Tomb of the Unknown Soldier. He cares about low taxes, lax regulation of business, breaking unions and talking tough toward foreigners. He is a Fox News Republican, not a Tory.

On the matter of the mission statement, it seems Walker misstepped. Faced with an outcry, he has backed down in an amusing way, first saying that the change was a "drafting error", then that it came from the university rather than from his office, then finally admitting it came from his people but not bothering to defend it. So the mission statement is saved. What happens to the $300 million cut remains to be seen.
Posted by John at 12:44 PM

The Corporations don't care about silly things like truth - they just care about having a good pool of wage slaves to draw from.

Training employees can be expensive, and intelligent free-thinkers are a threat to corporate interests, so why not buy off the government to change the national education system into a labor production mill?

And yet, I've previously complained about colleges and universities being all too willing to sell useless diplomas to their students, giving out hundreds of degrees for occupations that only sees a handful of yearly job openings.

If we're stuck with a choice between being exploited by two different parties, but one them has interests which happen to overlap with our own, then I suppose that's the lesser of two evils.

Call me old-fashioned, though, because I still feel like both corporations and schools ought to wholly dedicated to serving the best interests of the public - not the other way around.

The first is a muddle and too long. The second is an improvement even if the search for truth is left out. But who reads mission statements? Or budgets for that matter? And more to the point, when making program decisions do professors, administrators, and students wonder if they comply with the mission statement? I doubt it.

On the contrary, the first mission statement is perfect because it IS a muddle. The purpose of an educational mission statement is to protect students and faculty from meddling philistines. And the statement about truth at the end is actually crystal-clear, and I think (sniff) rather fine.

Since saying I told you so is one of the greatest pleasures available to human life after the age of 50, I will not forebear to point out that I've long argued that attitudes toward change as such are a bad way to define contemporary American conservatism and liberalism. As John puts it, contemporary, politically-relevant American "conservatism" is actually Fox News Republicanism. Indeed, their attitude of "you lose!" toward many kinds of change--work force culling, catastrophic illness, mountaintop removal--says to me that in many areas they are more positive about change than liberals.