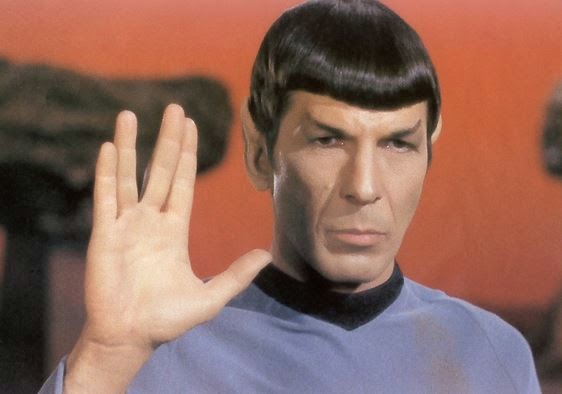 Grief for one who lived so long and well would be illogical, yet my human emotions demand it.

I always thought of Spock as a hero for Aspergers boys like I was, using logic to figure out how to get along in human society. As an adult I was surprised to learn that he also meant a great deal to other sorts of people, including immigrants who felt like perpetual outsiders, people of mixed race, and many blacks, especially those trying to make it in science or computing. Nimoy was Jewish, the child of Yiddish-speaking immigrants -- he said he invented the Vulcan greeting in imitation of a gesture he saw a rabbi make during a ceremony-- and Spock as a Jew resonated with a great many people. The new series of movies, in which the Vulcans have lost their home planet, seems to be playing up this angle. All of these fans look to Spock as a sign of what people with their own handicaps and troubles could achieve.

The power of a television presence to inspire people is very great. This may be especially true for lonely children and teenagers, desperately seeking for friendship and guidance in the big harsh world. Spock was a great gift to millions, a gift from Gene Roddenberry, the Star Trek writers, and from Leonard Nimoy. Nimoy sensed early on the power of his character, and he always took Star Trek more seriously than the other actors. After the show ended he tried hard to escape from being type cast and took all sorts of crazy roles to change his public persona. But later in life he came to fully embrace his identification with Spock -- I suppose looking back over his career he saw that he had been part of one truly great thing, and that is more than more people can say of their work.

Leonard Nimoy is gone, but Spock, his masterpiece, will live on for as long as our civilization endures.
Posted by John at 7:21 AM

The whole Star Trek cast seemed to try to distance themselves from the show for a great many years, and only seemed to come around to enjoying having taken part well down the road. The same seems to hold largely true for the Next Generations cast, and even for casts of completely different science fiction shows like Babylon 5.

For myself, while I always loved Spock, I think I was always slightly more fond of Nimoy's documentary narrations for some strange reason. The man had a soothing, comforting voice that I always felt paired wonderfully with descriptions of the strangeness and beauty of nature and the universe.