New Delhi's Air is Worse than Beijing's; or, Over the Hump into the Post-Modern World 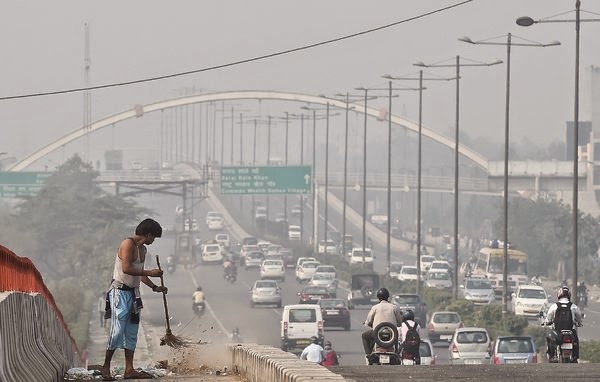 Another great city struggles with pollution:


Delhi’s air is the world’s most toxic in part because of high concentrations of PM2.5, particulate matter less than 2.5 micrometers in diameter that is believed to pose the greatest health risk because it penetrates deeply into lungs. While Beijing’s air quality has generated more headlines worldwide, scientists say New Delhi’s air is often significantly worse, especially during the winter, when choking smog often settles over the sprawling city.

Worse yet, the numbers tell only half the story because Delhi’s PM2.5 particles are far more dangerous than those from many other locales because of the widespread burning of garbage, coal and diesel fuel that results in high quantities of toxins such as sulfur, dioxins and other carcinogenic compounds. . . .

Already, an estimated 1.5 million people die annually in India, about one-sixth of all Indian deaths, as a result of both outdoor and the indoor air pollution. The country has the world’s highest death rate from chronic respiratory diseases, and more deaths from asthma than any other nation, according to the World Health Organization.

Some wealthy people are moving out of Delhi to protect their children. But even as awareness of the danger spreads, India is not well placed to do anything about it. It suffers from a chronic shortage of electricity, which is why the new Prime Minister promised last year to double coal production, and it relies heavily on a huge fleet of very dirty diesel trucks. Plus its population (unlike China's) is still rising rapidly. I suspect it will be a decade at least before anything meaningful is done, and in the meantime millions will be sickened or killed.

It seems there is a sort of hump that countries have to get over in the race to modernity. To move from a peasant and artisan economy to a modern one entails high population growth, terrible pollution, the growth of mega-cities with mega-slums, destruction of traditions and wholesale erasure of small towns and other traditional communities. In the US, Europe and Japan we have arrived on the other side of that hump, into a world of zero or negative population growth, improving pollution, strict regulation of development. For the most advanced countries the whole transition took two centuries. Korea went through the growth part of the transition in just 50 years; already its birth rate has collapsed, and it seems well on its way to creating a modern regulatory state. Much about the world's future depends on the speed at which other countries, especially China and India, can make these changes. Perhaps there is even a way to avoid the worst excesses of the industrial age; China managed to curtail its population growth well in advance of what a purely economic model would predict. Can the same be done with environmental destruction?
Posted by John at 7:33 AM