The Hope for Humanity vs. the French Government 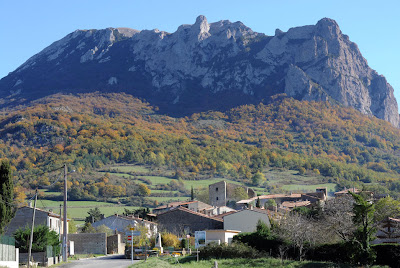 The Pic de Bugarach in southwestern France has long had an eerie reputation, and many rumors swirl around it:


For decades, there has been a belief that Pic de Bugarach, which, at 1,230 metres, is the highest in the Corbières mountain range, possesses an eery power. Often called the "upside-down mountain" – geologists think that it exploded after its formation and the top landed the wrong way up – it is thought to have inspired Jules Verne's Journey to the Centre of the Earth and Steven Spielberg's Close Encounters of the Third Kind. Since the 1960s, it has attracted New Agers, who insist that it emits special magnetic waves. Further, rumours persist that the country's late president François Mitterrand was transported by helicopter on to the peak, while the Nazis, and, later, Israel's Mossad, performed mysterious digs there. Now the nearby village is awash with New Agers, who have boosted the local economy, though their naked group climbs up to the peak have raised concerns as well as eyebrows. Among other oddities, some hikers have been spotted scaling the mountain carrying a ball with a golden ring, strung together by a single thread.

Some of the people who expect a global cataclysm on December 21 think that one of the few safe refuges will be the Pic de Bugarach. Some say there is an alien spaceship waiting inside the mountain to carry people away; others say it is where the spaceship will land. Either way, the mountain is clearly the place to be on the solstice. Sadly, the French state is not having any of this unauthorized survival:


France on Friday dashed the hopes of those who had planned to take refuge in one of the few places on Earth some believe will be spared when the world ends on December 21. Local officials banned access to the Pic de Bugarach, a mountain in the southwest where rumour has it the hilltop will open on the last day and aliens will emerge with spaceships to save nearby humans. Eric Freysselinard, the state's top representative in the area, said he was blocking access to the mountain for public safety reasons to avoid a rush of New Age fanatics, sightseers and media crews.

I mean, surviving the Apocalypse? Without a permit? Non!
Posted by John at 5:12 PM

i'm sure all the new agers would have unknowingly brought dihydrogen monoxide, that killer of children, tasteless, odorless liquid -- a chemical fer chrissake -- capable of fatal harm when misused.