Life Gets Better in Bangladesh; But How?

The Economist notes an interesting paradox in Bangladesh. Still one of the world's poorest countries, with no resources but rich soil and not much industry, Bangladesh has nonetheless made great strides in improving life for its poorer citizens:


Over the past 20 years, Bangladesh has made some of the biggest gains in the basic condition of people’s lives ever seen anywhere. Between 1990 and 2010 life expectancy rose by 10 years, from 59 to 69. Bangladeshis now have a life expectancy four years longer than Indians, despite the Indians being, on average, twice as rich. Even more remarkably, the improvement in life expectancy has been as great among the poor as the rich.

Bangladesh has also made huge gains in education and health. More than 90% of girls enrolled in primary school in 2005, slightly more than boys. That was twice the female enrolment rate in 2000. Infant mortality has more than halved, from 97 deaths per thousand live births in 1990 to 37 per thousand in 2010 (see table). Over the same period child mortality fell by two-thirds and maternal mortality fell by three-quarters. It now stands at 194 deaths per 100,000 births. In 1990 women could expect to live a year less than men; now they can expect to live two years more.

How has Bangadesh achieved these gains? 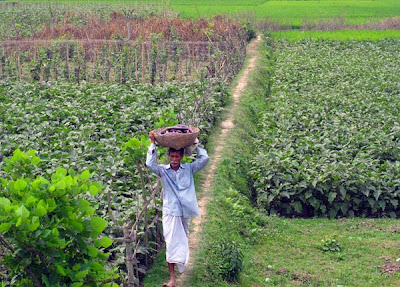 1) Providing free contraception to everyone. Without coercion, Bangladesh has seen the total fertility rate fall from 6.3 in 1975 to 2.3 today.

2) Growing lots of food -- the rice harvest has more than tripled since 1970 -- so that it has remained cheap.

3) Remissions from Bangladeshis working abroad, a category in which Bangladesh leads the world;

4) Intensive action by NGOs of every sort, especially a government-run entity called BRAC that will help poor Bangladeshis with almost any sort of business plan or improvement scheme. These activities are focused on families, and especially on mothers.

Human welfare is closely tied to economic growth, but the experience of Bangladesh and south India show that they are not the same thing.
Posted by John at 6:23 PM