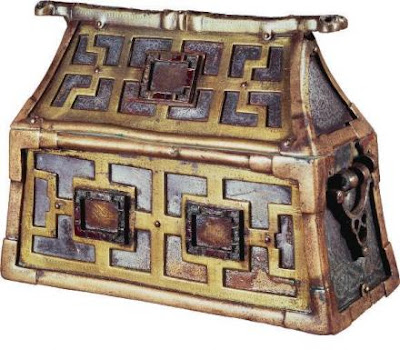 People at the Danish National Museum have lately been wondering what they should do with treasures found in Denmark, but obviously stolen by Vikings. One example would be the so-called Ranvaik's Chest, obviously a reliquary made in Ireland or Scotland.

I think this little thought experiment reveals the complete absurdity of the whole movement to return all works of art to their "country of origin." Suppose police seize a Greek statue that had been excavated in Italy, to which it was taken by Romans who stole it from Greece. To which country should it be returned? Egyptian artifacts dug up in Israel? Babylonian monuments found in Elam (in modern Iran), to which they were carried by Elamite raiders more than 4000 years ago? The mind boggles.
Posted by John at 7:31 PM