The Wheel of Fortune Turns in Burma 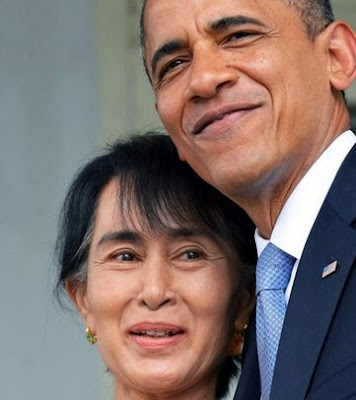 Aung San Suu Kyi's life has ridden the whole arc of the Wheel of Fortune. She left a comfortable academic life in Britain and returned to Burma in 1988, hoping to contribute in some modest way to a democratic opening then underway. But then the military leaders crushed that movement and placed Suu Kyi under house arrest for 15 of the next 20 years. From her modest home, by saying next to nothing, she somehow became the spiritual leader of the Burmese resistance and won the Nobel Prize. Her stature grew so great that when the generals decided that real democratization was the only path forward for the country, they released her and brought her into the government to help them manage the transition. Now she receives the President of the United States in her home.

I suppose the point of the visit is to reward the Burmese for their partial opening and to make it harder for them to go back to hermit dictatorship. I think this is well worth the President's time, since the Burmese situation is far from settled and the new hybrid government has yet to take up any of the country's long-standing problems -- economic decay, ethnic separatism, the belief of the generals that they deserve a big say in running the country even though they couldn't get 10% of a fair vote. I wonder if fate doesn't have more shocks in store for Aung San Suu Kyi and her country.
Posted by John at 9:02 AM