The Lady of the North 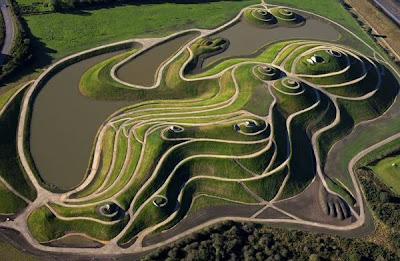 The Lady of the North, alias Northumberlandia, is an enormous earth and stone sculpture designed by Charles Jencks, part work of art and part exercise in environmental remediation. It is formed from 1.5 million tons of British earth and stone. It is said to be the largest human figure on the planet; its breasts are 100 feet tall, and there are 4 miles of walking paths. Its origin:


The Lady is a joint project of the Blagdon Estate, a 10,000-acre family property that dates to 1698, and the Banks Group, an energy company. Banks is extracting coal from a surface mine next to the site. The entities wanted to create an iconic feature that would enhance a part of the site, given its visibility near a major highway and rail line, and they shared its $5 million cost. 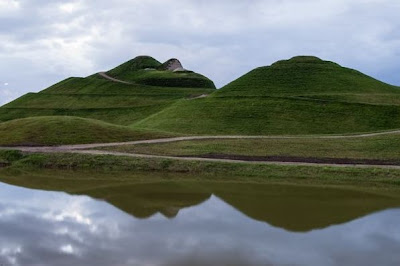 This seems like a good idea to me; Britain needs coal, which means destructive mining, and the people profiting from the mining are trying to replace some of the lost beauty with something new and exciting. But what, you ask, does it mean? Charles Jencks is, after all, a man with a lot of ideas, a harsh critic of modernism and the designer of the famous Garden of Cosmic Speculation.

Jencks, 73, is part of the post-Modern generation. He is fascinated by contemporary science, but with the eye of an artist rather than that of a scientist. To him,


"We are living in a new paradigm. We now know the universe back to the beginning; we know so many things that upset the modernist Newtonian worldview." While the old sciences “were linear, deterministic and relatively simple,” Jencks said, the new cosmic age brings a cauldron of fractals, spirals, soliton waves and other shapes. He sees their effects everywhere — in the chaotic dance of a hurricane, the stormy Great Red Spot of Jupiter, a draining bathtub or even the nerve impulses of our brains.

The attitude toward Newton is the key clue to where Jencks is coming from; real scientists still idolize Newton and think that his work has more in common with quantum mechanics than either has with philosophical speculation. But like many other artists, Jencks is fascinated by the new language of chaos and strange attractors, and the way an overarching order -- like, say, the climate, or life -- emerges from a mass of madly disordered details. 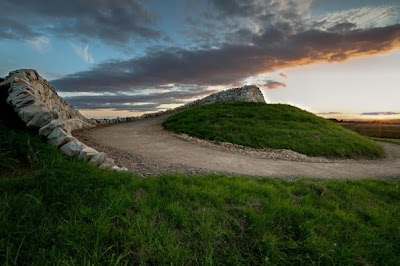 This seems to be the vision of Northumberlandia. Many Britons have taken her as a pagan symbol, and some Evangelicals protested the project, fearing that pagans would have to have sex on key parts of the Lady. But Jencks explicitly denied this:


She’s not a pagan god, and people aren’t going to lose their moral compass if they walk all over her.

She is life rising from the dead earth; order from disorder; a new, higher level of being "emergent" from simpler ones. Like humans evolved from bacteria, the Lady represents the self-organizing forces of the universe, the appearance of organisms within the cosmos that are coming to understand the rules by which they themselves came to be. This is the "statement" Jencks put on his web site:


To see the world in a Grain of Sand, the poetic insight of William Blake, is to find relationships between the big and small, science and spirituality, the universe and the landscape. This cosmic setting provides the narrative for my content-driven work, the writing and design. I explore metaphors that underlie both growing nature and the laws of nature, parallels that root us personally in the cosmos as firmly as a plant, even while our mind escapes this home. 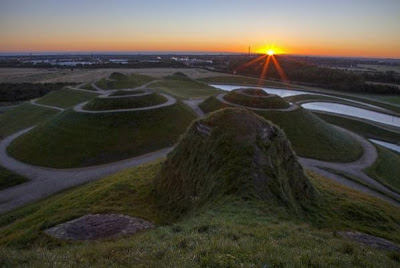