Things Coming out of the Ground 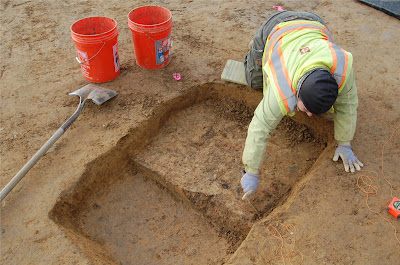 This week we finished stripping the plowed soil off our site in Delaware, mapped what we found, and then started digging into things. This rectangular pit looks like a root cellar, that is, a small cellar that would have been under the floor of a house. The most interesting thing about it was the soil filling it. The soil consisted largely of daub, which is clay that has been fired a little but not enough to turn it into brick or pottery. There were also numerous lumps of unfired clay. On a colonial farm site like this one, the most likely source for both daub and clay would be a wooden chimney. Because there is so little brick on the site, we already suspected that it must have had a wooden chimney, and this confirms it. Wooden chimneys were always lined with clay, which the heat in the flue eventually turned to daub. Even so they were still fire traps, since the clay lining eventually cracked or flaked off or some such, a spark got through, and the heat-dried wood burst into flames. These chimneys were loosely connected to the house, so they could be pried away with an ax or a pitchfork, possibly saving the rest, but they were really not a great idea and people who could afford it replaced them with brick or stone as soon as they could. The folks at our site did not, which is another reason to think that the site was not occupied for very long. 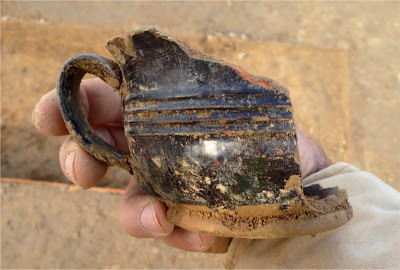 There were not many artifacts in the daub-filled pit, but one of the things we did find was this porringer. A porringer is a small bowl with a handle, meant to be held in your hand while you eat from it. They are a very traditional form, and they remind us that most medieval people did not eat their meals at a table. Instead they sat around the hearth, with their food in their hands or on their laps. Tables were for special occasions, and for rich people. Over the course of the 17th, 18th, and 19th centuries, more and more people came to eat their meals in the more formal way, sitting down together at a table. Porringers were still common in America down to the Revolution, showing that many people kept to the old ways. Dining at table probably reached its peak in the early 20th century, and it has since faded like many other bits of Victorian stiffness.
Posted by John at 6:17 PM