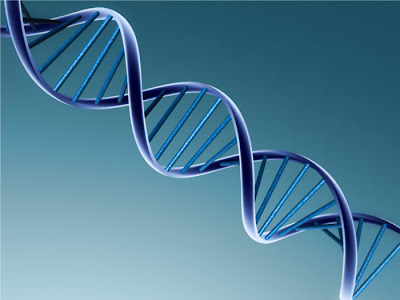 Most biologists believe that DNA was not the first genetic material for life on earth. It seems fairly certain that RNA came first -- even now there are organisms that use RNA exclusively, whereas all DNA-based organisms rely on RNA to carry instructions from DNA to the protein making machinery. Even RNA, though, is a complex and unstable molecule that has trouble existing on its own, and it seems a stretch to imagine strands of naked RNA wandering around the primordial soup, replicating themselves and exchanging bits with each other. The difficulty of understanding how RNA came to be has led some scientists to imagine that it must have fallen to earth from space, presumably having formed in some environment more friendly than earth's early oceans. (Or in the lab of the cosmic creator.)

Most scientists dislike such divine-seeming interventions. But if it did not come from space, where did RNA come from? Could it have evolved from a simpler, more robust system? 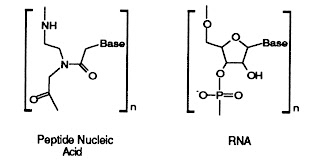 One theory of what might have come before RNA is PNA, peptide nucleic acid. As you can see in the comparison above, PNAs can be simpler than RNA. They also form more readily in laboratory models of the early ocean and are stable in a wider variety of conditions.

One of the peptide molecules that forms readily in those laboratory oceans and likes to make long chains is AEG, or N-(2-Aminoethyl)Glycine. Recent experiments have shown that if you induce AEG to polymerize (form long chains) in the presence of nucleic acids like adenine and guanine, you can get a long chain of nucleic acids bound to the peptide backbone. (The basic structure of DNA and RNA.) Since nucleic acids are robust, readily formed molecules that exist throughout the universe (they have been detected in interstellar space), this is an almost plausible model of how information-containing molecules could have formed in the primitive ocean.

Life as we know it is very conservative. Rather than discard systems that are no longer used, organisms usually adapt them for another purpose. So it seems reasonable that if organisms once used AEG for a key purpose, they should still be using it for something. Thus the headlines this week about the discovery of AEG in cyanobacteria. Cyanobacteria (blue green algae) are some of our most primitive life forms, so their use of AEG suggests that it might have used in early life on earth. We don't seem to know what bacteria use AEG for, but its existence in living things lends some credence to the PNA model of early life.

Really, though, the origin of life remains a great mystery, one that we may never solve. Even if we eventually work out a series of steps by which cellular life might have come into being, it will be very hard to show that this is what actually happened.
Posted by John at 12:38 PM