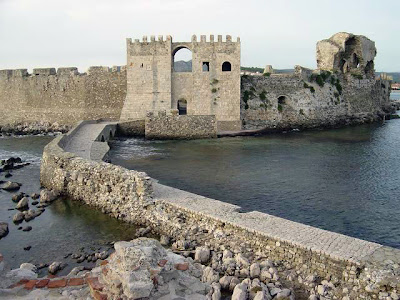 Methoni is a Venetian fortress on the west coast of the Peloponnesus, built in the thirteenth century and rebuilt in the fifteenth. The Venetians began to develop a foothold in this area in the twelfth century, to suppress pirates. After they helped the Fourth Crusade take Constantinople, they were rewarded with lands all over Greece, including two towns in this area. They built the fortress to control their new possessions, and their sea routes to Constantinople and Egypt. 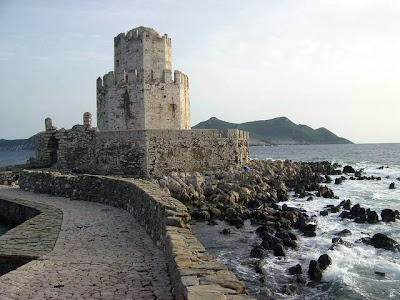 The famous fifteenth-century watch tower. The Venetians held Methoni until 1500, when it was taken by the Turks after a bloody siege:


Methoni fell after haveing been in the hands of the Venetians for about three hundred years. Happy for his trophy, Vagiazit made the yenitsar who first climbed the walls a santakbei, meaning a provincial commander, and on the first Friday after the invasion, when the fire went out, he went to the desecrated cathedral to offer his thanks to the god of battle, to whom, as he confessed when he was looking into the deep moat, owed the conquering of this fortified city.

(No idea where that came from; I got it from this site.) 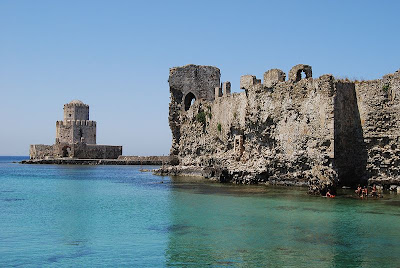 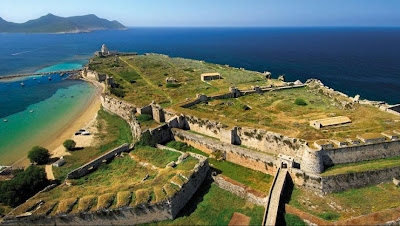 The Turks slaughtered most of the inhabitants and then forced towns all over Greece to send people to repopulate the place. According to some of the tourist sites I have looked at this morning, locals say that wind the wind blows through the watchtower you can still hear the ghosts of the massacre victims wailing their cruel fate. 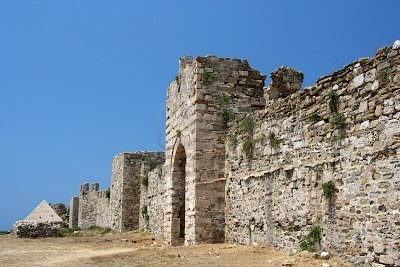 The Venetians conquered it again in 1680, and then in 1715 the Turks took it back again. After that it slowly decayed into a ruin. 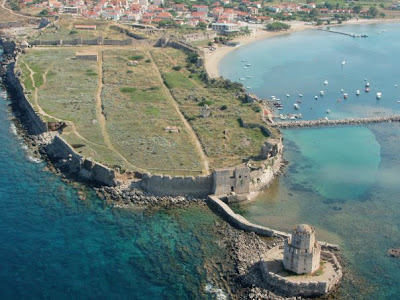 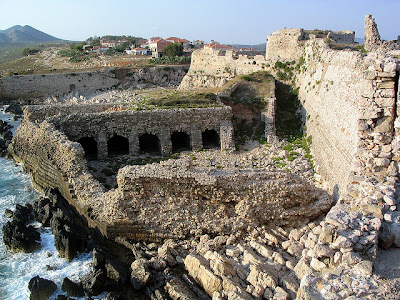 I had no knowledge of the many French and Venetian castles in southern Greece until I went there in 1991. Driving around the Peloponnesus, my mother and I stumbled across a huge French castle, utterly unguarded and unpromoted. The Greeks, after all, care not a whit about these monuments to their humiliation by the crusaders, so a huge fortress that in France or Britain would be thoroughly roped off, guard-railed, caution-signed and interpreted was just sitting in the countryside, slowly crumbling. I climbed around that castle like I have never climbed around another since. 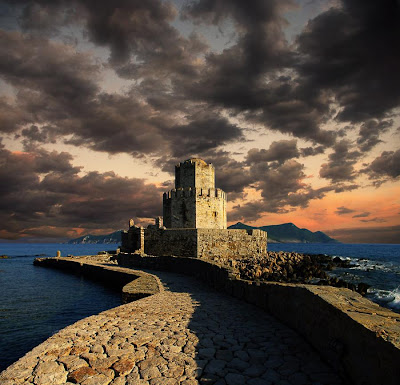 I have no idea what castle it was that I climbed (it wasn't this one). But I post this castle in remembrance of that day, and to call my readers' attention to the unpromoted medieval wonders of Greece.
Posted by John at 8:14 AM