Turritopsis dohrnii and the Dream of Eternal Life 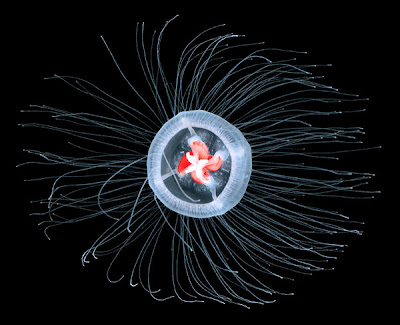 Lots of speculation on the web these days following Nathaniel Rich's big article in the Times magazine on Turritopsis dorhnii, the "immortal jellyfish."


Like most hydrozoans, Turritopsis passes through two main stages of life, polyp and medusa. A polyp resembles a sprig of dill, with spindly stalks that branch and fork and terminate in buds. When these buds swell, they sprout not flowers but medusas. A medusa has a bell-shaped dome and dangling tentacles. Any layperson would identify it as a jellyfish, though it is not the kind you see at the beach. Those belong to a different taxonomic group, Scyphozoa, and tend to spend most of their lives as jellyfish; hydrozoans have briefer medusa phases. An adult medusa produces eggs or sperm, which combine to create larvae that form new polyps. In other hydroid species, the medusa dies after it spawns. A Turritopsis medusa, however, sinks to the bottom of the ocean floor, where its body folds in on itself — assuming the jellyfish equivalent of the fetal position. The bell reabsorbs the tentacles, and then it degenerates further until it becomes a gelatinous blob. Over the course of several days, this blob forms an outer shell. Next it shoots out stolons, which resemble roots. The stolons lengthen and become a polyp. The new polyp produces new medusas, and the process begins again.

Actually this sort of immortality may be a common feature of animals in that range, hydras and sea cucumbers and whatnot.

Personally, I fail to see the relevance for human life. Note the intermediate stage Turritopsis passes through on its way to rejuvenation: "it becomes a gelatinous blob." How much memory or personality would be likely to survive that? The study of hydrozoans may shed some light on cancer and such -- they do very cool things with micro RNA -- and it is fascinating in its own right, but it seems to me that our brains are not good candidates for the sort of rebirth some simpler animals can undergo.