Japanese Militarism in the Meiji Period 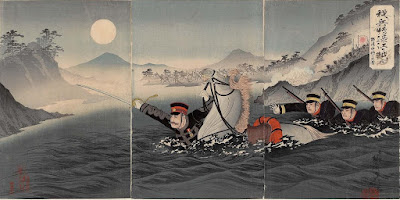 Japan rose to great power status thanks to a massive program of industrialization and victory in two wars, the Sino-Japanese War of 1894-1895 and the Russo-Japanese War of 1904-1905. In the nineteenth and early twentieth centuries Japan had a great tradition of woodblock printing, with dozens of active presses. So, of course, the propaganda of these wars and the creation of the Japanese Empire was accompanied by thousands of woodblock prints. In this print by Yôsai Nobukazu, Crossing the Yalu River, 1894, you can see a glimpse of the more usual subject matter of Japanese art in the background, with the stern soldiers in the center. 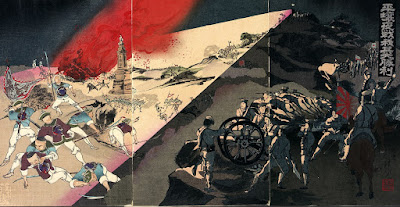 Many Americans were closely tracking those Asian events. Some were supportive of Japan and were happy to welcome Japan into the league of great powers, while others were suspicious of Japanese motives from the beginning, but either way they were keeping an eye on Japan's rise. Americans therefore collected many of these propagandistic prints. Hundreds of them eventually made it into museums; both the MFA in Boston and the Saint Louis Art Museum have major collections of this material. After I stumbled on these I did some searching and discovered that the MIT Visualizing Culture site has a long essay on them. (Our Army's Great Victory in the Night Battle at Pyongyang by Kobayashi Toshimitsu, 1894) 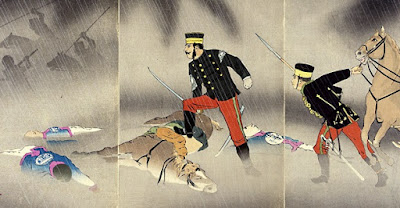 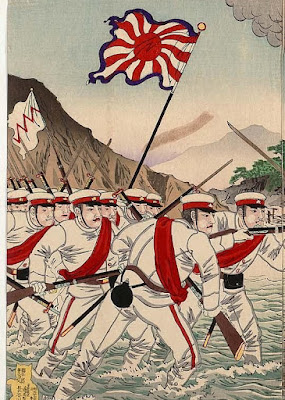 One of the themes of this propaganda is how modern and western the Japanese army and navy are, compared to the more traditional, more oriental portrayal of the Chinese and Koreans. (Top, The Hard Fight of the Scout Cavalry-Captain Asakawa by Kobayashi Kiyochika, 1894, and a detail from a work by Yôsai Nobukazu.) 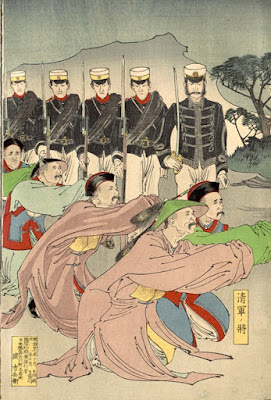 The contrast is especially clear in this print, Chinese Officers Captured Alive at Pyongyang by Migita Toshihide, 1894. Whereas the Japanese are in white or black, the Chinese and Koreans are always dressed in colors, with a sort of feminine softness. 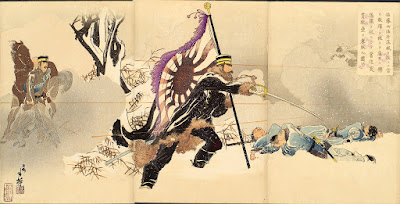 Japan had of course been culturally dominated by China for a thousand years, and the decisive Japanese victory of 1894-1895 inspired a burst of confidence in the militaristic, modernizing leadership. They adopted the slogan "Out from Under Asia," meaning that they had escaped from Oriental backwardness and joined the modern, western elite of nations. 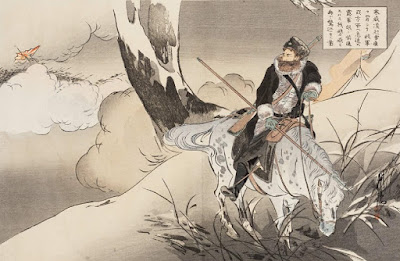 Some of the design here is of a very high level; I especially like this image by Ōkura Kōtō, in which a Russian soldier flees from a Japanese army that appears as a sort of storm cloud. (Braving the Bitter Cold of a Snowy Night, Our Troops Advanced Rapidly in a Certain Direction, and the Russian Troops That Were Already There Were Shocked at Our Might and Withdrew Again) 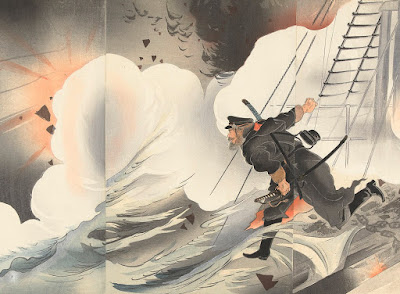 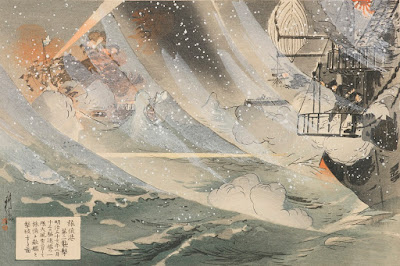 Many of the naval images play up the new technology of the era, as well as the bravery of Japanese sailors and officers amidst the chaos. These were among the first battles between iron-clad battleships, and by 1905 the Japanese navy was the most experienced in the world at this type of fighting. The course of the naval fighting in the Russo-Japanese War was that the Japanese bottled up the Russian Far Eastern Fleet in its two bases, Port Arthur and Vladivostok. Both Russian fleets tried to break out, but after confused, indecisive engagements in which both sides fought badly, they retreated to their ports. Then the Russian Baltic fleet arrived after a seven month voyage around the southern end of Africa, an astonishing logistical feat, only to be shattered by the Japanese in the battle of Tsushima. Six of the eight Russian battleships were sunk, and the rest of the fleet had to surrender. Many historians think it was the experience gained in their two previous battles that gave the Japanese such a decisive advantage. When something is so new that nobody has ever done it before, even a small amount of experience can make a huge difference. 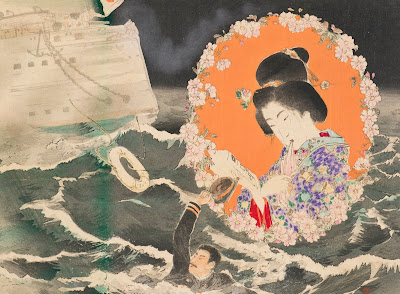 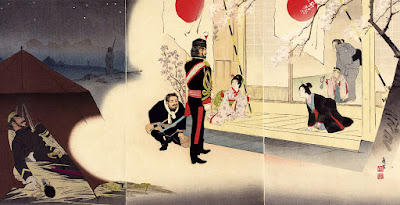 And yet while military action was always portrayed in the most modern terms, the home front seems almost medieval, the women frozen in time. Here we have the cover illustration from a sentimental novel of 1905 and A Soldier's Dream by Kobayashi Kiyochika, 1894. I have a sense that this heavily gendered model of development, in which the men were supposed to charge forth and become westernized soldiers and businessmen, while the women stayed home and preserved tradition, still haunts Japan.

One reason these images fascinate me is because of a major "what if" of history. I think it's easy to understand how Japan acted in the 1870-1910 period. Humiliated by the technical prowess of the west, they resolved not to be left behind, and progress they made in two generations is astonishing. Their victory over the Russians was cheered by thousands of other non-westerners, for example in India, as proof that the non-western nations could challenge the European powers. Yes, they established an empire in Korea and China, but Britain, France, Germany and Russia also had empires, and the Japanese desperately wanted to join that club. The Japanese were not in this period particularly brutal conquerors; on the contrary they prided themselves in meeting the best western standards for the treatment of prisoners. They made major investments in the economic development of Korea and Taiwan, just as the British and French did in their empires. They might have continued on that path, becoming more like Britain or France over time. 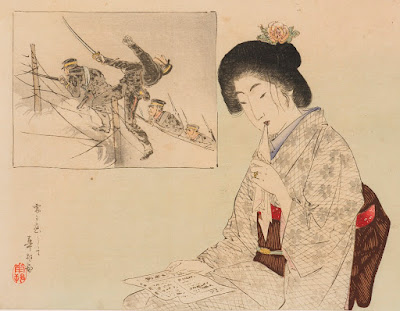 Yet somehow they did not. Somehow the militarists continued to grow in power while the civilian parliamentarians shrank away.  Somehow the professional treatment of prisoners gave way to using them for bayonet practice, and the building of schools in Korea to the Rape of Nanking. Did it have to happen? Were the seeds of the Banzai state already sown in this earlier era of nationalism and empire? Or was there a chance for a different path, toward co-existence with the west and gradual liberation of Korea and Taiwan? Did it take the cataclysm of World War II to break the old imperial world that the Japanese fought desperately to join, or might it have faded on its own? Was their a more peaceful path toward the contemporary world? Or did the brutality of empire have to grow until it burst across the world as Fascism and ruin?  These images make me wonder.

Yet somehow they did not. Somehow the militarists continued to grow in power while the civilian parliamentarians shrank away.

It's worth bearing in mind that the same rapid Westernization that so radically transformed Japan also left it with a lot of cultural and emotional baggage, and although the traditional values of the samurai were deeply eroded in some ways, they did manage to persist in others.

We're talking about a people who were still only about a generation or two out from a system of feudal warrior lords. It was samurai nobles who restored the Emperor and pushed for Westernization. All the most sweeping changes in Japanese society were essentially the direct product of samurai efforts to remain relevant in a world that had largely left them behind.

Immediately prior to the restoration, Japan had enjoyed a very long, prosperous time of general peace and national isolation in which martial traditions were relaxed or neglected, and samurai spent far more time writing poetry than conducting warfare.

The Meiji period, in contrast, was defined from the start by Japan turning away from that "civilian" footing and growing increasingly more militarized and modern to meet the threat of a Western-dominated world. Despite the restoration wresting power away from a nominally military Shogun and granting it instead to a nominally civilian Emperor, the resultant shift in national attitude ran overwhelmingly the other way, in large part because many of the major players were themselves samurai seeking to retain some semblance of relevance and influence going forward.

I believe a large part of the reason that Japan didn't become more like Britain or France was that it was, in effect, rediscovering its own martial traditions that had languished and lain dormant. For all the modernization that was occuring, one of the most dominant cultural forces at the time was the remythologizing of the samurai, and the framing of the new Empire as a reinvention and continuation of those traditions. One might compare it to western mythologizing of Rome and claims of being the true inheritors of their great legacy.

Everything about Japan's modernization had been predicated upon turning away from a "civilian" system and instead becoming ever more militant, and having found success through that it makes perfect sense that they would seek to continue the trend. Maybe in time the cultural pendulum would have swung back the other way without the need for all the bloodshed and brutality, but there was an awful lot of cultural momentum to be overcome there and it would have been a slow, difficult process.