A Year of Haruki Murakami 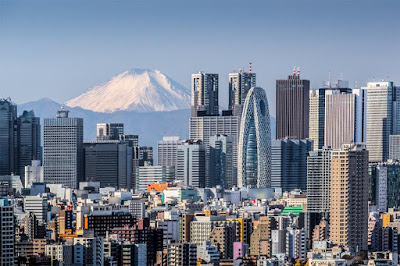 A few years ago I read a novel by Haruki Murakami, Colorless Tsukuru Tazaki and His Years of Pilgrimage, which I rather enjoyed. Then this year I found myself on a sort of Haruki Murakami binge, reading or listening to five more novels (A Wild Sheep Chase, The Wind-Up Bird Chronicles, Hard-Boiled Wonderland and the End of the World, Dance, Dance, Dance, and Killing Commendatore) and three novellas (Hear the Wind Sing, Pinball, and After Dark). You may be thinking, "Wow, you must really love Haruki Murakami," but that isn't quite true. I like Haruki Murakami. I enjoy reading his work. But what really kept me coming back all year is puzzlement over how a strange, idiosyncratic writer who violates every rule ever set down for creating best sellers has been so consistently successful. How can one get rich and famous writing books with very little sex or violence and hardly a moment of suspense or tension?

Haruki Murakami was born in 1949, the son of two literature professors and grandson of a Buddhist priest. His father had fought in Manchuria during the Russian offensive of 1945 and was psychologically scarred by the experience. In 1974, after graduating from college, Murakami founded a jazz club which he ran with his wife for seven years, until he was struck with a sudden inspiration to write. He is much involved with western culture, especially music and literature, and he is more likely to mention Coltrane, Mozart or Tolstoy than any Japanese cultural figure. He speaks fluent English and has personally overseen the English translations of his works, as well as translating several English novels in to Japanese. It took him only a few years to become a successful writer, and for the past 25 years he has been by far the most successful Japanese novelist; one of his books sold a million copies in the first week after its publication.

The typical Murakami narrator is a Japanese man who completely lacks the career ambition that defines conventional Japanese masculinity. He is a small-time artist or would-be writer or owns a small translation business, or perhaps he works in some support role like researcher for a law firm. As the story begins he may not be working at all, because he has lost his job or quit in disgust or lost his wife and gone off on a months long camping trip to think things over. So he spends a lot of time puttering around his house or apartment, cooking, cleaning, running errands. Often he has a wife who is much more ambitious and careerist than he is, who may or may not be having affairs with more handsome, more ambitious men. He has been tangentially involved in the protests and radical movements that swept Japanese universities in the late 1960s and early 1970s, but he has no politics to speak of beyond a vague dissatisfaction with Japan as it is. In the first two novellas he is something of a wit and a jerk, but after that he is consistently a really nice guy, considerate of others, determined to do the right thing. What he is doing while everyone else is working or romancing is trying to figure out who he is. This is, to me, the defining thing about Murakami's writing, the relentless quest for self-understanding.

Murakami is often classed as a writer of "magical realism." There are certainly things in his books that transcend the laws of physics as generally understood, but these are very limited and operate mostly within people's minds. I have thought at times that Murakami's world is a lot like that of the National Enquirer. There are cursed houses where everyone commits suicide, cursed families where everyone meets a bad end, significant dreams that predict the future or guide us through it, visions that convey profound things about our lives, mediums or "sensitives" who feel things others cannot. There is also a sort of shamanistic other world where psychological events and forces take physical form, and characters hold important conversations with spirit guides or do battle with sinister spiritual enemies. The "reality" of these events in the other world is open to question, and often the narrator is not sure if he is dreaming or not. And anyway these otherworldly events are not relevant to anyone else, but are exclusively part of his own quest for meaning. (Except, sort of, in The Wind-Up Bird Chronicles.)

A typical Murakami plot goes something like this, abstracted from A Wild Sheep Chase: the narrator, recently divorced, bored with running his small advertising business, receives a letter in the mail from an old friend who disappeared some years before. The letter contains a black and white photograph of sheep grazing in a mountain meadow, completely innocuous looking, and a request that he use it in something. So he puts the photograph in a brochure for a life insurance company. Immediately, crazy things start to happen. He is contacted by the private secretary of a secretive political figure who seems to control all of Japan from behind the scenes, and who has had visions of exactly the sheep in that photograph, which incidentally are a breed never raised in Japan, which launches the narrator on a journey that is partly in search of sheep but mostly of himself. Etc. To a remarkable extent, nothing much happens, certainly nothing conventionally exciting. People talk and think and dream. They travel around Japan, but their travels are mostly just strings of hotels, restaurants, and conversations. In the end the reader is generally left wondering whether any of the questions that drive the narrator's quest have been or ever will be answered.

Certain things come up over and over again. Wells, especially dry wells, in which a character may spend many hours of self-reflection; teenage girls who ask brutally frank questions about sex and adult life in general; mysterious millionaires who drive British cars; western jazz and classical music; memories of World War II, especially echoes of atrocities committed by and against Japanese soldiers; hotel corridors; intense sexual dreams; characters obsessing over how boring or weird or ugly their names are.

To get back to where I started: what makes Murakami so popular? Partly it must be his style, which is charming and quirky, full of amusing little asides. But I think the key is the celebration of self-exploration. Japan seems to be full of people who resent or resist the pressure toward conformity and careerism, and Murakami's characters are collectively the patron saint of Japanese anti-conformism. People read him to see self-exploration and self-understanding portrayed as the most important things we can do. The message does not seem narcissistic because Murakami's characters are anything but self-involved; they are the kind of people who haven't sorted out what they want because they work so hard at taking care of others. They are loyal friends, loyal spouses. The crisis that launches their exploration often begins when someone else abandons them, leaving them to wonder what they should have done differently. They bumble around, trying to be good, trying to do the right thing, trying to figure out both the strange events unfolding around them and their own place in the universe. Told in the right way, with the right voice and the right amount of quirkiness, this seems to be a winning formula.

If you are curious about Murakami, I recommend starting with The Wind-Up Bird Chronicles. This was my favorite so far and best explains the place of the shamanistic other world in Murakami's view of human life. If you have a taste for science fiction you might try Hard-Boiled Wonderland and the End of the World, which is quite different from the others I have read. It interweaves two plots, one a strange near-future sci-fi story featuring a mad scientist, the other a fantasy set in a very small, fairy tale sort of universe; the two plots come together and force the narrator to choose what sort of life he wants, and under what circumstances he considers life worth living. If you prefer fiction without any magical elements Murakami's first two novellas have been published in a volume titled Wind/Pinball, and I thought them quite fine.
Posted by John at 7:27 PM

I've read one of his novel and it was very good ("south from the border, west from the sun" or something like that) - and it was in a language which was not personally supervised by Murakami, that's for sure :D