The Most Devastating Cyberattack


I’ve often thought that the single most devastating cyberattack a diabolical and anarchic mind could design would not be on the military or financial sector but simply to simultaneously make every e-mail and text ever sent universally public. It would be like suddenly subtracting the strong nuclear force from the universe; the fabric of society would instantly evaporate, every marriage, friendship and business partnership dissolved. Civilization, which is held together by a fragile web of tactful phrasing, polite omissions and white lies, would collapse in an apocalypse of bitter recriminations and weeping, breakups and fistfights, divorces and bankruptcies, scandals and resignations, blood feuds, litigation, wholesale slaughter in the streets and lingering ill will.

This is from "I Know What You Think of Me," an essay that has become very famous in certain internet circles because of this passage:


Years ago a friend of mine had a dream about a strange invention; a staircase you could descend deep underground, in which you heard recordings of all the things anyone had ever said about you, both good and bad. The catch was, you had to pass through all the worst things people had said before you could get to the highest compliments at the very bottom. There is no way I would ever make it more than two and a half steps down such a staircase, but I understand its terrible logic: if we want the rewards of being loved we have to submit to the mortifying ordeal of being known.

Which has led to all sorts of responses like this: 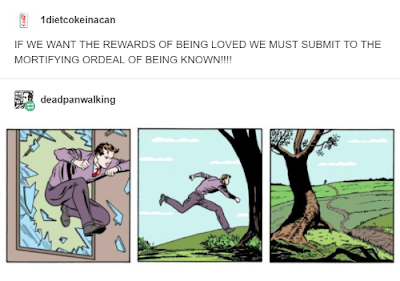 I’ve often thought that the single most devastating cyberattack a diabolical and anarchic mind could design would not be on the military or financial sector but simply to simultaneously make every e-mail and text ever sent universally public.

Okay, so first up - absolutely not possible. There isn't some centralized server or system where every single e-mail ever sent is stored. So if we're already playing in the realm of fantasy where impossible hacks can be performed, this surely doesn't hold a candle to something like magically hacking the US and Russian nuclear systems and launching a bunch of ICBMs, setting off the apocalypse.

Second, even waving our magic fairy wand and making it possible to do this, so what? Now there's a giant mess of un-sorted emails, numbering beyond imagining. It'd be a massive ball of noise, clogged by billions of routine, often automated messages of little to no value, and finding anything of value would require monumental effort.

To start with, you need to get your hands on a copy of this All E-mails Ever database, which is going to be tricky because the file size is going to be gigantic. We're assuming the database is publically available, but you still need to transmit the data somehow. Even asusming you somehow have the disc space to hold all the data, you still need to download it which will take a very, very long time.

So now you've magically downloaded the impossibly large AEE database onto your impossibly big storage device in an impossible short period of time. What do you do with it, and why?

Even assuming you can easily filter out e-mails to a certain specific person, that still means someone with ill intent first needs to pick that person. And that requires some sort of reason or motive, which is frankly just lacking in most cases. Most of us don't give a damn about the e-mails of strangers, and probably don't really care about the e-mails of people we actually know either. There will be the odd case of someone with a grudge against a specific person, but that will be rare.

But let's assume someone with an axe to grind looks up somebody they don't like. Now what? Are they going to sift through untold thousands of e-mails looking for something incriminating, when most of them are going to be bank statements, office memos, spam advertizing, and other utterly insignificant junk?

This impossible hack would be ugly for highly prominent people and companies, because they'd be worth devoting effort to sorting through all their garbage messages in hopes of finding something interesting, but for the average person? Barely any effect. A lot of politicians and corporate types might lose their jobs, but turnover in those fields isn't exactly low to begin with and society would move on pretty quickly.

The problem in this imagined hack is that it assumes the worst of people, and that's just not reasonable. If you had a magic wand that could unlock every lock in the world at the same time, that would certainly cause SOME amount of cause, sure, but you'd be shocked how few of those opened locked would actually be misused or exploited. People fundamentally have little to no interest in doing things like robbing houses or stealing cars - only the more desperate or deranged among us are driven to such things, and they make up a very small percentage of people.

typo - "SOME amount of chaos*"