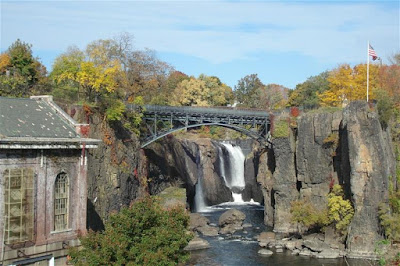 In the wilds of north-central New Jersey, the Passaic River encounters an old crack in the earth's rocky surface and plunges 77 feet down what are called its Great Falls. 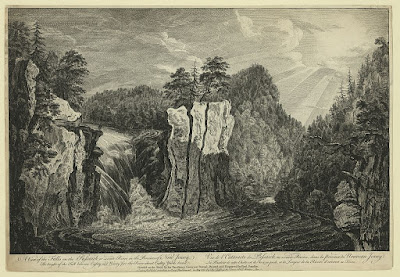 Long ago this was considered a natural wonder, and people traveled from New York and Philadelphia to see it. This 1750s engraving by Thomas Pownall captures something of its sublime appearance when it was a landmark of the frontier. 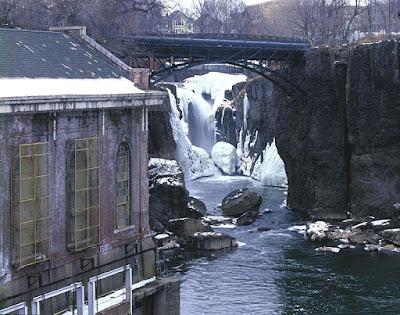 But in those days men tended to see water falling downward and think about power, not beauty, specifically the power to drive mills. Their eye on England's water-powered industrial revolution, men began to scheme about how to harness the force of the Passaic's plunge. Enter one of America's heroes, Alexander Hamilton. Hamilton, not resting on his laurels as war hero, constitutionalist, etc., was traveling around the new nation promoting his idea that to achieve real independence America needed to industrialize. At some point he met the promoters of Passaic power and latched onto their plan. With help from some of his wealthy friends – whatever his other faults, Hamilton was great at befriending rich people and getting their support – in 1791 Hamilton founded the Society for the Encouragement of Useful Manufactures, or S.U.M. The S.U.M. was a sort of public-private partnership, privately owned but with various government help, including ten years of tax exemption. It occurs to me that one reason Hamilton got along so well with Washington was that they thought the same way about business. First, identify a major national need, like more industry or a canal across the Appalachians; then, found a company to profit from meeting it.

S.U.M. raised a lot of money from investors in New York and Philadelphia and hired engineer Pierre L'Enfant, best known for his plan of Washington, DC, to harness the falls. L'Enfant's plan involved building a dam above the falls and routing half the river's water through a complex series of races, eventually rejoining the river a mile below. This was far too ambitious for S.U.M.'s resources – much like, come to think of it, his plan for Washington, DC, which was mostly empty space for the next 50 years and did not fill out until after the Civil War. 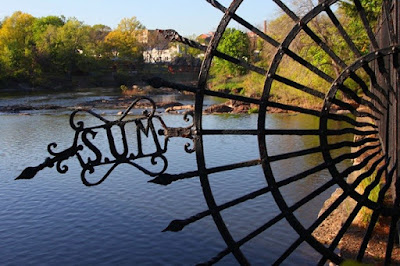 So the Society brought in an English miller named Thomas Marshall, who padded his resume with inflated claims about his role in various major English mills. Marshall took one look at the Passaic Great Falls and proclaimed it entirely the wrong spot for industry. This threw S.U.M.'s board into turmoil and they spent a year considering other sites before they ended up back at Great Falls, partly because it was half way between New York and Philadelphia and therefore convenient to all of them. 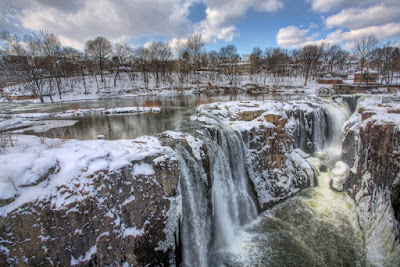 L'Enfant's dam was eventually built by an American named David Godwin. Godwin and another American named Peter Colt engineered a much simpler raceway, and the first mill was up and running by 1794. This was a cotton mill, the first of several powered by the S.U.M.'s dam. It was joined in a few years by the continent's first continuously rolling paper mill. A town was built to house the workers, named Paterson after the governor of New Jersey, a key supporter. This was America's first planned industrial town.

However, the initial burst of development petered out in the long post-Revolutionary depression, and after Hamilton died in his famous 1804 duel the company was nearly moribund. Then in 1809 Jefferson enacted his embargo on British manufactured goods, and American manufacturers leaped to fill the void. By 1815 there were 13 cotton mills in Paterson, employing 2,000 workers, and the population of the town was approaching 5,000. S.U.M., short on capital, gave up trying to operate its own mills and let others do that. They made their money in three ways: selling water power to factory owners, leasing land to factory owners, and leasing or selling land in the growing town of Paterson, which they entirely owned. These revenues kept the company going until 1945. 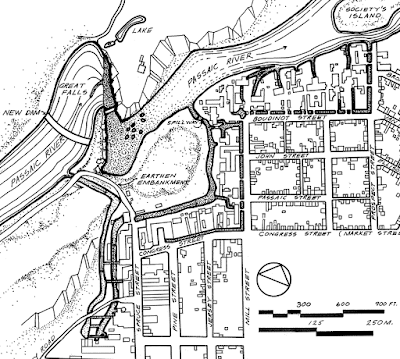 Paterson grew along with American manufacturing. A raceway system like the one originally designed by L'Enfant was up and running by the 1830s, providing more than 2,000 horsepower. This map, from the Historic American Engineering Record for the Passaic Great Falls historic district, shows the basic layout of the races in their developed form. 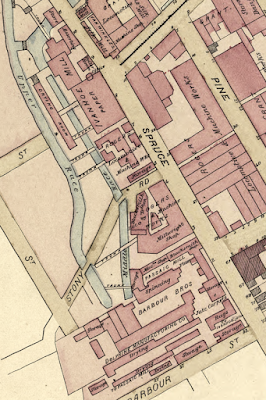 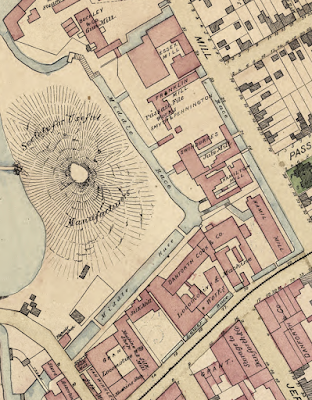 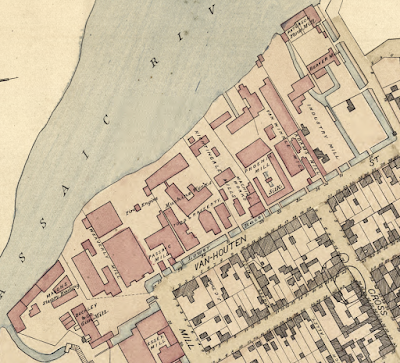 These maps, from at atlas of 1877, show the industries that grew up to use this power. Cotton mills were replaced by machine shops, including a gun factory that was the first in the world to build Colonel Colt's patented revolvers. By 1877 the biggest factories in town made railway locomotives, but there were still textile mills and others. The diversity of industry allowed the town to thrive through the nineteenth century's dramatic ups, downs, and technological changes. 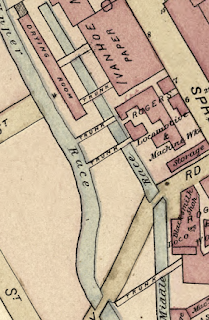 Notice the elevated sluices that cross from the upper Raceway directly into some of the mills in the top map and the detail above; that water was fed down through vertical turbines, a new technology of the 1840s much more efficient than old-fashioned water wheels, and one reason why water power remained viable in the age of steam. 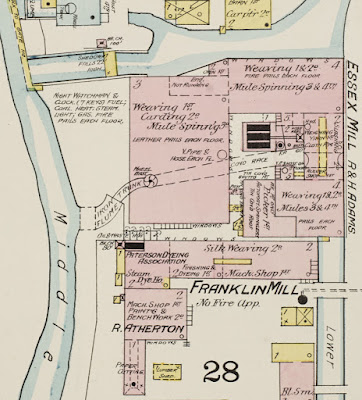 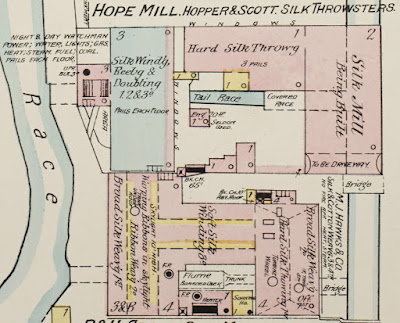 These images, from a fire insurance map of 1887, show how the water passed through and was used in two factories. 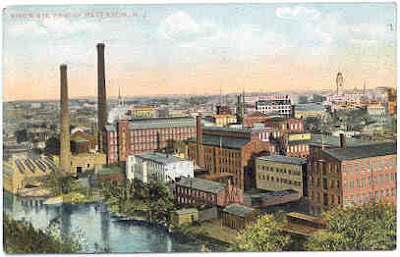 Paterson reached its peak in the 1890s when a proliferation of silk mills led to it being nicknamed Silk City. 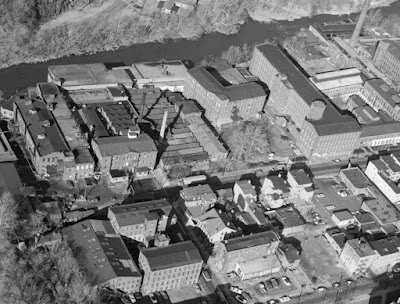 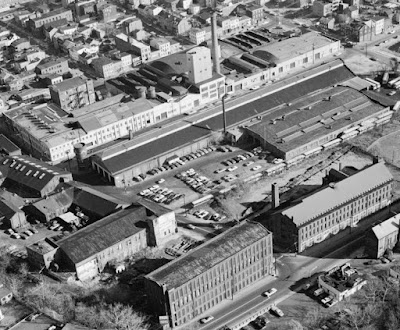 Aerial photos of Paterson's factories from the HAER report, taken in 1973. 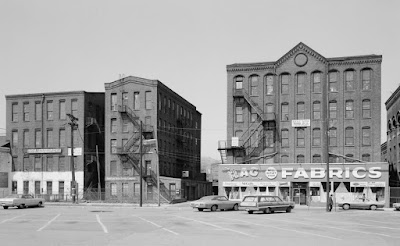 Paterson declined in the Depression and never really came back. It remained a manufacturing city into the 1950s, but after that the old mills closed one after another. 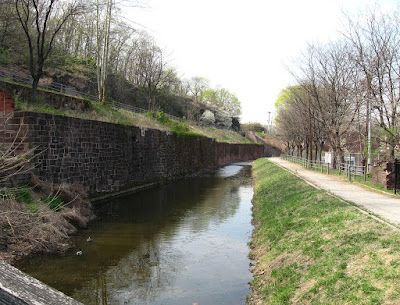 Incidentally the main theme on the National Park's web site is the importance of immigrants in the story of Paterson, from Hamilton and L'Enfant to the thousands of Irish, Italian, and Polish migrants who worked in the mills. Letting their politics show, I think. This picture shows the Middle Mill Race as it looks now. From hub of industry to quaint historical site: the course of history. 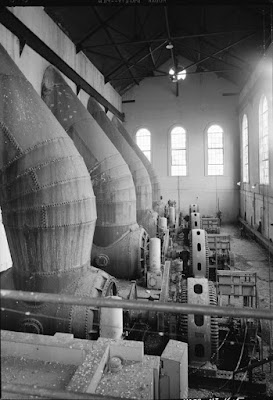 Incidentally the main theme on the National Park's web site is the importance of immigrants in the story of Paterson, from Hamilton and L'Enfant to the thousands of Irish, Italian, and Polish migrants who worked in the mills. Letting their politics show, I think.

Telling the truth is political?

I guess they're also being blatantly pro-environment, since they're talking about mills that required a functioning river to operate, and the town likely drew their drinking water from the same source and likely couldn't have existed if the river were polluted?

Also, blatantly anti-slavery, since these mills paid their workers instead of owning them as chattel! For shame, these politicizing fiends!

Also, most blatant of all, they're clearly pro-historical conservation! Can't we just stop with all this unsightly "letting politics show"? A government website about a historical site shouldn't make any mention of any fact that is in any way related to anything that could be considered political at all!

Civil War Battle Memorial? Don't mention who won the battle! Too political! Home of one of the founding fathers? Don't you dare mention which political party they belonged to at the time! Keep politics out of it! A historic slave plantation? Keep your racial politics out of it! Just the facts, ma'am! And even then, only the ones that paint the most neutral image possible!

As you surely know, G, telling the truth is very often a political act.

In that case, I want a political party whose entire political platform is telling the truth.