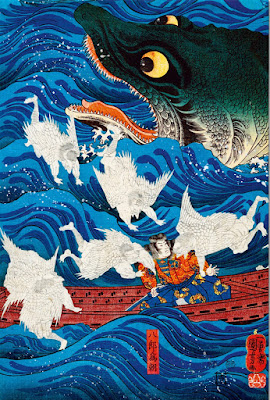 Fascinating profile of science fiction writer William Gibson, by Joshua Rothman in The New Yorker. Rothman argues that Gibson seems so prescient about the future because he doesn't write about the future; he writes about the present.

Raising pigs without antibiotics in Denmark. I think the important point here is that people often say environmentally-friendly things can't be done, but when the incentives are strong enough somebody finds a way.

Major British study finds that loneliness has gotten less common over the past 50 years.

"The number of research papers with more than 1,000 authors has more than doubled in the past 5 years." There's now a word for this: "hyperauthorship."

The long aftermath of a 2010 Twitter war over literary sexism.

Archaeology on the now-uninhabited island of Chrysi near Crete, where Minoan people farmed the marine snail Hexaplex trunculus and processed them for purple dye.

The AGM-114 R9X Hellfire, an American missile designed to reduce collateral damage by killing with sword blades instead of explosives, has been used at least three times in Iraq and Syria.

Democrats tie themselves in knots over whether Andrew Yang is a "person of color," whether he is properly "representing Asians," and so on.

Interestingly, the main conclusions of the article about political cynicism seem to be that the current cynicism is tending to promote political engagement rather than apathy, and it is highly partisan in nature. There may be some cussed independents who distrust government and politicians as such, but what a lot of Americans really distrust is the millions of other Americans on the opposite side of the partisan divide. We're not united by cynicism or a desire for change or whatever--division is our main political reality.

"Sorry, no idea. It's the cover illustration from Taschen's new book of Japanese Woodblock prints, but none of the hundreds of web sites that reproduce it says what it is."

It's the left panel of a triptych, "Minamoto no Tamatomo Rescued By Tengu", depicting what the title describes.

Further context is that Minamoto has been caught in a storm magically conjured up by a dragon on behalf of the Taira clan (often lambasted in official chronicles and popular myths as power hungry sorcerers, as they were a rival Imperial lineage and the Minamoto clan would eventually destroy them and seek to discredit their legitmacy, quite naturally favoring their own claims instead).

Although the story was apparently popular enough at times to spawn numerous different depictions of it in paintings and woodblock prints, it seems a little hard to track down the actual story itself on the English internet.

The print, described above, is by Hokusai (c.1835; Minneapolis Institute of Art).