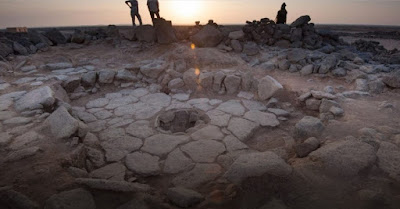 Archaeologists working at the 14,000-year-old Natufian site of Shubayqa 1 in Jordan have found the charred remains of flat bread similar to that made in the region for thousands of years thereafter. This is about 2,000 years older than the first evidence of agriculture in the region and 4,000 years before everyone accepts that farming was a going concern.


The presence of hundreds of charred food remains in the fireplaces from Shubayqa 1 is an exceptional find, and it has given us the chance to characterize 14,000-year-old food practices. The 24 remains analysed in this study show that wild ancestors of domesticated cereals such as barley, einkorn, and oat had been ground, sieved and kneaded prior to cooking. The remains are very similar to unleavened flatbreads identified at several Neolithic and Roman sites in Europe and Turkey. So we now know that bread-like products were produced long before the development of farming.

This makes sense, I mean, why would people go to all the trouble of raising and grinding grain unless they already had yummy ways to eat it? (Or drink it, I guess, but the evidence for beer is thousands of years later still.) But anyway it is nice that we have actual evidence for Mesolithic bread.
Posted by John at 7:33 PM