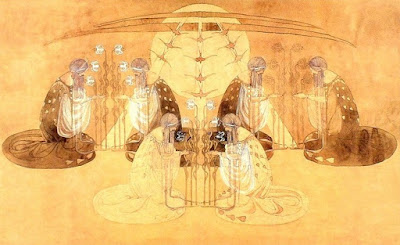 The pioneers of Art Nouveau in Scotland were the "Glasgow Four," four young people who studied together at the Glasgow School of Art: sisters Margaret and Frances MacDonald and their future husbands, Charles Rennie Mackintosh and Herbert MacNair. 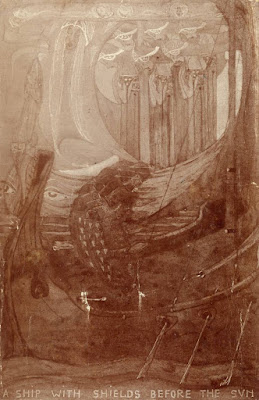 A Ship with Shields before the Sun

The MacDonald sisters started out working together and co-signed many works; they said they forgot who had done what. But after they married they were physically separated, Frances (with Herbert) in Liverpool and Margaret (with Charles) in Glasgow. So Frances' mature work was very much her own. 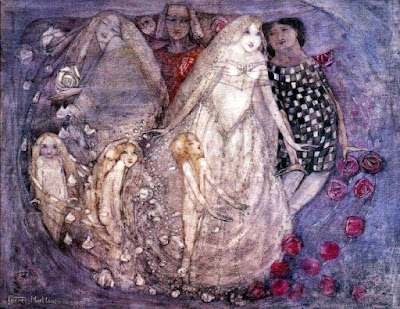 Critics at the time thought the work of all four was shot through with sexual tension. Wits joked about the complications that lay behind this, but if they ever did anything beyond the bounds of Edwardian propriety I can't find any trace of it. 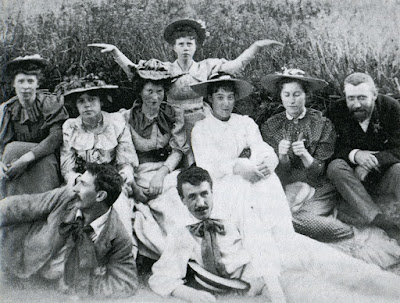 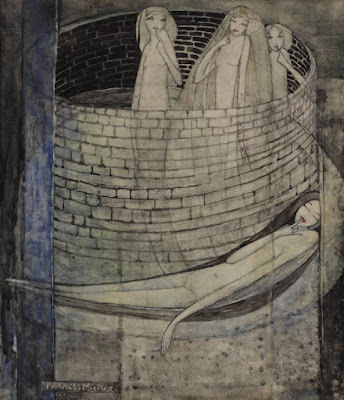 Truth Lies at the Bottom of the Well

Frances (1873-1922) entered the Glasgow Art School in 1891. In 1895 she and her sister withdrew and set up their own studio, where they painted and created works in metal, ceramic, and wood. In 1899 Frances married Herbert MacNair and they moved to Liverpool where Herbert had a job teaching architecture.

They had a few years of success and exhibited in Vienna in 1900 at the invitation of Gustav Klimt. Alas MacNair was the weakest of the four, and after a series of stumbles he lost his job in 1905. They moved back to Glasgow but Herbert never found work and drifted off into drink, leaving Frances pretty much alone to raise and support their daughter.

Her work is obviously influenced by the godparents of the British Art Nouveau, William Blake and Aubrey Beardsley. So maybe it isn't especially ground-breaking. But it is lovely.

Glasgow School of Art poster
Posted by John at 6:55 PM