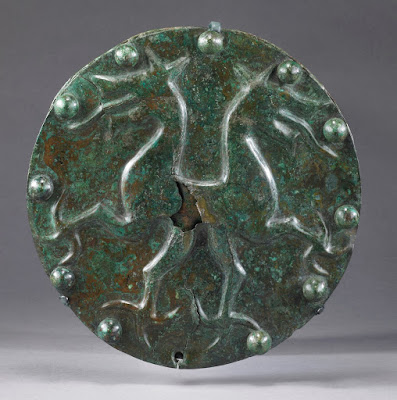 The Saint Louis Museum of Art has three of these mysterious bronze discs, which they suggest are shield bosses or ornaments for armor. I'm not sure why they think this; they don't say, and so far as I can tell these were all discovered in the nineteenth century. Anyway they all come from Italy and are dated to the Orientalizing period, c. 700 to 600 BC. Some are Etruscan, but others are from other areas and are designated Italic. 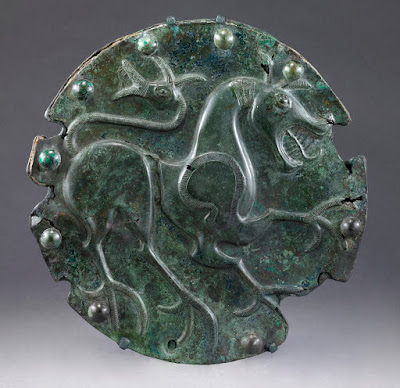 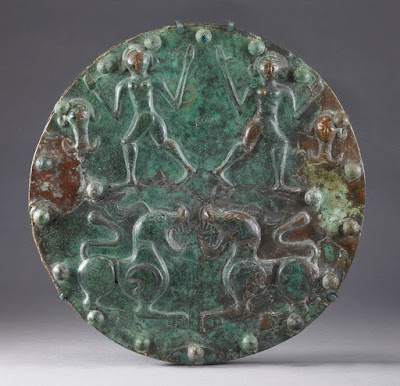 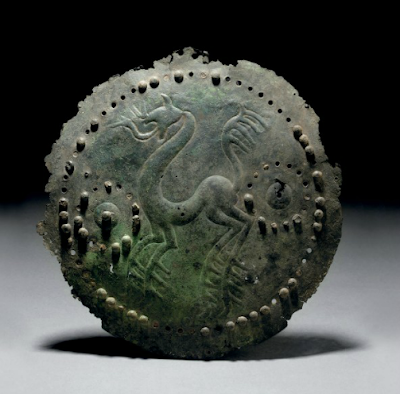 Since I liked these so much I searched for more but didn't have much luck; I found this one on Pinterest, apparently from an old sale at Christie's in New York. So these are not such rare items. But beyond these four all the Etruscan Bronze Discs or Etruscan Shield Bosses i have found have abstract designs, like this one in the Boston MFA collection. Not nearly as much fun as these.
Posted by John at 7:36 PM

The Saint Louis Museum of Art has three of these mysterious bronze discs, which they suggest are shield bosses or ornaments for armor. I'm not sure why they think this; they don't say, and so far as I can tell these were all discovered in the nineteenth century.

They do -look- a fair bit like shield bosses, if for no other reason than the rivets. But the actual shape seems wrong - they're almost entirely flat.

The kinds of shields that employ bosses are usually held onto by a solid wooden central grip, rather than strapped to the arm of the user. This puts the user's hand in the center of the shield, and the shield is used with a "punching" style motion, pushed outward to meet, catch, and deflect incoming blows in a manner that's much more akin to "parrying" than to "blocking" as we often think of it.

The point of a shield boss, then, is to provide an especially sturdy core for the shield, both strengthening the entire shield overall and maximally protecting the most important part of the shield - where it is held, and where you ideally want incoming strikes to land in order to best absorb and deflect their force.

Another important thing about bosses is that they allow you to construct round shields that are mostly flat across their surface, as opposed to convex "bowl" shaped shields which are not only more difficult to construct, but are also much more reliant on a strong outer rim to stay intact.

In theory you could have a flat shield boss, but you lose an awful lot of the structural benefit compared to convex ones, so I'm not sure why you would choose to add weight to the shield if not for a more reasonable tradeoff in extra protection. Perhaps these were purely decorative? Or perhaps they're not even shield bosses? Hard to know.

That said, I did get curious and check the museum's website for dimensions, and found numbers for two of the discs which do seem to put them into the appropriate range for shield bosses. (One is 9 and 3/4 inches, another is 12 and 7/8 inches.) I wish we could see the reverse of these discs, as that might tell us more.

Personally I'm not sure what else they might be if not shield bosses, particularly given the riveting, but if they are shield bosses they're a bit odd, so... yeah, I kinda agree with them on their ambiguous labeling.