Based on standard personality tests, the kind that give you "Big 5" scores, the difference in personality between men and women is large:


In one recent study, Tim Kaiser, Marco Del Giudice, and Tom Booth analyzed personality data from 31,637 people across a number of English-speaking countries. The size of global sex differences was D = 2.10 (it was D = 2.06 for just the United States). To put this number in context, a D= 2.10 means a classification accuracy of 85%. In other words, their data suggests that the probability that a randomly picked individual will be correctly classified as male or female based on knowledge of their global personality profile is 85%.

Consistent with prior research, the researchers found that the following traits are most exaggerated among females when considered separately from the rest of the gestalt: sensitivity, tender-mindedness, warmth, anxiety, appreciation of beauty, and openness to change. For males, the most exaggerated traits were emotional stability, assertiveness/dominance, dutifulness, conservatism, and conformity to social hierarchy and traditional structure.

And the differences are biggest in those nations with the most gender equality: the Scandinavian countries always show up as having the biggest difference, followed by the Anglosphere, with conservative Muslim nations at the bottom. 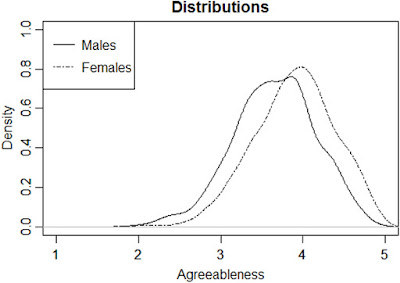 
For instance, if you look at the density distribution for agreeableness, the average difference between males and females is only about .4 of a standard deviation. However, if you look closely you can see that there are way more women than men who are super-agreeable and way more men than women who are super-disagreeable. It's likely that the behaviors carried out by those tails have a huge impact on society.

So men are on average only a little more obnoxious than women, but at the far end 90 percent of the raging assholes are men.

As to what, if anything, we should do about this, I would say that this is one of the major long-term questions we need to somehow come to terms with.
Posted by John at 12:28 PM

Consistent with prior research, the researchers found that the following traits are most exaggerated among females when considered separately from the rest of the gestalt: sensitivity, tender-mindedness, warmth, anxiety, appreciation of beauty, and openness to change.

It occurs to me that these are all classically "feminine" traits, and that in most societies woman are culturally primed and expected to express such traits, which would quite naturally make them more common among women.

And the differences are biggest in those nations with the most gender equality: the Scandinavian countries always show up as having the biggest difference, followed by the Anglosphere, with conservative Muslim nations at the bottom.

In my mind, gender equality is directly linked to tolerance, and in tolerant societies there is more room for diversity.

As I see it, in a more conservative culture, individualism and extremes of behavior are discouraged in favor of conformity. And in a more liberal culture, there's a greater general acceptance of extreme examples on both ends of any given spectrum, and that allows the averages at each end to trend further apart. "Hyper-masculine" men and "hyper-feminine" women don't crop up nearly as often in conservative cultures, because over-exaggeration of one's gender norms is often just as discouraged as defying one's gender norms is. But in a more liberal, tolerant, and permissive society, it seems only logical that exaggerated traits would be more common.

Well, it seems glaringly obvious that testosterone and estrogen are major factors. There's no question that it affects thought patterns and behaviors in ways that map incredibly well to the "masculine" / "feminine" divide in most cases. I think it's fair to say that a massive factor in anyone's personality is their particular brain chemistry balance, and your physical sex in turn is a massive factor in that.

But culture is also a massive factor, and one that's very tricky to study. We live in a world that is disproportionately dominated by patriarchal societies, and I think we typically overlook that fact, and in turn fail to recognize the affects that has on us which might not be present or as pronounced otherwise.

When comparing liberal Scandinavians to conservative Middle Easterners it may feel like there is a massive difference, but you have to account for all the major things the two groups have in common, but that get taken for granted.

They use the same basic number system. They use pretty similar grammar systems. They historically used much the same systems of government, at much the same times. Ditto for economic systems, and for general levels of technological advancement. They both follow Abrahamic faiths that share fundamental assumptions of the world. And they both were overwhelmingly patriarchal societies in which women had severely limited rights, often justified on religious grounds, and were excluded from property, titles, and power in nearly every case.

How might things differ if it were able to compare to a fundamentally different paradigm? There are a small handful of matriarchal societies still extant on the planet - shouldn't we also be conducting these surveys among the matriarchal Mosuo people of China, the Minangkabau of Indonesia, the Nagovisi of New Guinea, etc? It would be fascinating to see how much things differ in woman-led societies.

Mosuo people are not matriarchal and are not "woman-led"

Your points of encouraging personal liberty is wrong. It would mean that SDs in more liberal societies should be higher, not that means would be different. More extreme "feminine women" effect would be canceled out by more extrem "masculine women" number. Hence, the idea that differnces in means could be explained by the more tolerance towards the extremes has no sense.


But, obviously, as usual in such article there is one strange omission. HUman populations differ. It could be just that the differences between women/men in Scandinavia are greater because of purely biological reasons.

That suggests you believe people from different parts of the globe are essentially of different species or sub-species.

Which in turn implies, however unfairly, that if you believe in such biological differences, you are biased toward or against one or more of the "races"-- even though genetically there is no such thing as "racial" difference.

1 of 2:
That suggests you believe people from different parts of the globe are essentially of different species or sub-species.

No. That's a strawman. I believe that populations from different parts of even the same country MAY have differences in gene variants frequencies.

In fact, if you would think about it just for a minute, you should have realised than you reasoning is completely flawed. The most obvious example is skin color. Scandinavians have different skin color, on average, than Congolese and this is biologically based. This does not imply Scandinavians and Congolese are different species or sub-species.

So, if you think that "szopen thinks there could be biologically-based differences between Scandinavians and Congolese implies szopen thinks COngolese and Scandinavians are different species and it means he is biased towards or against Scandinavians or Congolese" THEN you should apply the same logic here. Do you believe differences in skin color are biologically based? If yes, then by your own logic "it suggests pootrsox believe people from different parts of the globe are essentially of different species or subspecies" and "if pootrsox believe that skin color is biologically based then pootrsox is biased toward or against one or more of the "races"".

I don't want even consider the idea that you could think skin color differences are not biologically based, or that most idiotic idea that somehow some biological differences imply existence of species, while other do not (though I already met people who believe such things).

2 of 2
though genetically there is no such thing as "racial" difference.

That's a falsehood, though it depends on how you define "race" or "difference". It is well known that for many gene variants their frequencies differ between many populations - in fact this is one of the basis for one of the old definition or a "race". So if you take the old book definition of "a race is a population where for many genes their variant frequencies differ from other populations" (this is not my defnition, this an old "race" definition found in old scientific articles and books from as recently as 90s), then obviously "racial differences" do exist, genetically. Some people instead create their own strawman definitions of "race" and then tryumphantly declare that by their definition "race" does not exist.

Other say that "race" is a term too imprecise, too loaded and too confusing (because there were so many definitions and in addition there were/are also in addition the folk definitions), so we should rather you terms like "ancestry" or "populations" to replace "race". This is a valid criticism, but - it's completely irrevelant to the discussion.

Because the question of whether Scandinavians are biologically different from say Congolese is completely orthogonal to the question whether "races" exist. There could be perfect cline between COngolese and Scandinavians (i.e. with no possibility to create any clusters), and still there can be biological differences between those two groups, which should be obvious from the example about skin color. You wouldn't argue that in fact it's impossible for Congolese and Swedes have different skin color because the variation of skin color is perfectly clinal and because borders dividing nations are somewhat arbitrary, would you?

It should be obvious, but just in case it isn't, imagine a bunch of red and white balls, where red balls are slightly hotter than white balls (it doesn't matter why, it's just an example). If you would just randomly separate red and white balls into two groups A and B, and then measure the average temperature for group A and B, then one of explanation for the differences found is the most simple one: that by accident you can assigned slightly more red balls to group A.

What's the most amazing is that somehow some people think that in the example above, if I say "group A is hotter than group B because frequencies of red ball occurences in groups A and B differ" implies "there are no red balls in group B AND group A and B are perfecly separated". Bullocks. Are you one of those people?

Which in turn implies, however unfairly, that if you believe in such biological differences, you are biased toward or against one or more of the "races"

And that's a slander.