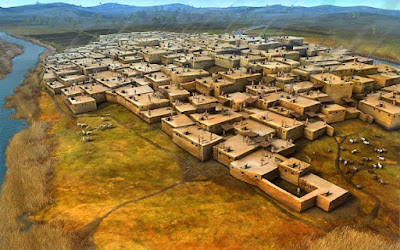 The neolithic settlement of Çatalhöyük in southern Turkey has fascinated the world since it was first discovered. It was quite large, 32 acres, and so densely packed with houses that people had to enter their homes through holes in the roof; streets, one supposes, had not been invented yet. There were occasional "courtyards", roofless spaces within the mass of buildings, but they could also only be entered from above and most seem to have filled up fairly quickly with refuse. The population of the town at its peak may have been as much as 8,000, enough that some call it the first city.

Which raises a lot of questions. Why, in such an empty world, would some of the first farmers in that region choose to live in such a dense mass?

If you try to imagine what that was like, you will immediately see the problems. What happened to the trash and waste? A lot of it seems to have been dumped into those courtyards or any other available space, and what was put in baskets for removal may have just been carried across the roofs to the edge of the town and tossed off. The place was full of shit, examination of which has shown that the residents all suffered from worms and other intestinal parasites. And another question: how did people get along? Didn't they drive each other crazy as people living in such close quarters usually do? 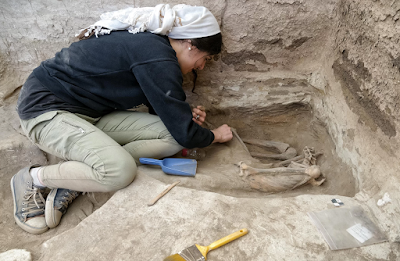 A new study of burials from the 7100 B.C. to 5950 B.C. period confirms these problems. According to the analysts, their data show that Çatalhöyük was "a highly stressful environment."


Recently, archaeologists compiled 25 years of data gathered from the remains of 742 individuals at Çatalhöyük. In the preserved evidence of more than 1,000 years of Neolithic life, the scientists discovered "a compelling record of elevated levels of interpersonal violence" triggered by the stress of city living, the researchers wrote in the study.

The scientists found that the number of injuries, evident in skeletons, increased when the community was at its largest, suggesting that as Çatalhöyük's population boomed, violence became more frequent. About 25% of the 95 examined skulls showed healed injuries made by small spherical projectiles, probably a clay ball flung by a slingshot. Many of these clay spheres were also preserved around the site, according to the study.

The majority of the victims were women, and they appeared to have been struck from behind; 12 of the skulls had been fractured more than once, the scientists reported.

Disease was also rampant in Çatalhöyük when the city was at its most crowded, with around 33% of the human skeletons showing signs that hinted at bacterial infection. During that same period, approximately 13% of the women's teeth and 10% of the men's teeth were riddled with cavities — the result of a diet rich in grains.

The investigators also found that the amount of heavy work the inhabitants did started out as greater than that of hunter-gatherers and only increased over time, so that after a millennium the people of Çatalhöyük were worn down by their labors and suffering from arthritis and the like as a result. 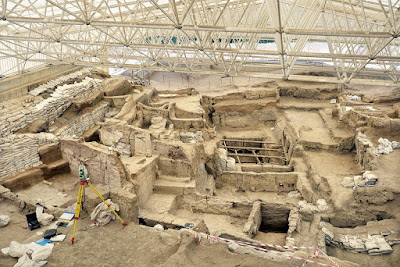 There are a lot of problems with these numbers, and the biggest is that we know the burials at Çatalhöyük were not a random sample. There are not nearly enough of them to represent the whole large population; consider that for a period of a thousand years in a community of at least 5,000 people they only have 742 bodies to study. Since we don't know why some people were carefully buried within the settlement and why others have vanished, we can't really say who these people were.

I would also question the assumption that the violence shown by these skeletons represents conflict within the community. What about attacks from outsiders? Because the most obvious answer to the question of why they lived piled on top of each other like that is, "for defense." If they were regularly being attacked by outsiders, who (say) used sling stones to attack women who went out to get water or work in the fields, that could explain a lot. The usual objection to this is to point out that the iconography of these people never shows war, and few weapons have been found. They do not seem to have been very warlike. But maybe that was the point; by living together in such a large community they were able to achieve safety without militarization.

Here's another thought: if those women with head injuries were killed by their neighbors, could these have been stonings, carried out by this close-knit community against those who violated its norms?

The cost  of that density to their way of life was high no matter how you look at it: disease from overcrowding, tooth decay from a grain-heavy diet, many injuries from violence. Why didn't they simply spread out across the landscape into smaller, more manageable settlements, where they might have had more access to wild foods and thus a more diverse diet? 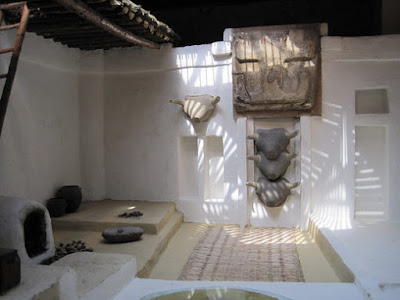 As I said, I think the threat of violence from outsiders is one reason. The other may be the social and spiritual attractions of life within a large community. Çatalhöyük got famous because of the density of religious art in certain buildings that the site's original excavator, James Mellaart, called "shrines." The more convincing interpretation, put forward by Ian Hodder, is that these are houses that had become the central places for family cults within which the elders preserved secret knowledge and shared it as needed with younger non-initiates. I imagine that the people of these settlements were obsessed with secret cults and the level of their initiation within them; I imagine that their social and spiritual lives revolved around initiations and other semi-secret rituals enacted in these small, dark house-shrines. Perhaps they devoted their lives to achieving higher and higher ranks in more and more cults, to learning more and more secrets, as certain aboriginal Australians still do.

Their identities, we can assume, were wrapped up in their home: in its cults, its art, its ritual, its families and clans. They stayed within its disease-ridden, violence-plagued walls because moving away to some smaller, more open community meant giving up everything they cared about.
Posted by John at 10:46 AM

Everything you say here makes good sense to me, based in part on the overall emphasis on issues of identity and culture over practical reason. I'm struck by the similarities and differences between CH and the Pueblo societies. Similarities include the importance of clan rites and clan secrets, embodied in restricted places of worship, and the prevalence of violence (which, in the case of the Pueblos, can be documented both between and within settlements), with agglomeration seemingly driven by the needs of defense but with those same needs not leading to the construction of fortifications as such.

The main difference I'm struck by is that CH seems to have lasted and lasted--a millennium of continuous settlement, according to what you've written. Many Pueblos settlements seem to last no more than a century (with notable longer-lasting exceptions). Also--CH seems to have no public ritual space--or have I misinterpreted?--and it *seems* to stand as a solitary settlement in its region. What evidence if any do we have of other similar settlements around it, at the same time?

"About 25% of the 95 examined skulls showed healed injuries made by small spherical projectiles, probably a clay ball flung by a slingshot."

There must be some translational issues going on, as slingshots are a modern development, requiring rubber or similar. I assume they mean slings instead.

@David -- no, no public spaces have been found in the town. If they had large group rituals they must have been held outside, and there isn't any evidence of that. On the other hand most of the inhabitants must have been buried outside the walls, or whatever was done to them, so something clearly happened out there.

The main mound was occupied for about 1200 years; there are 15 levels of houses, each occupied for 75-100 years before it was cleaned out, torn down, and another one built on top of the rubble.