Flag of the 127th US Colored Infantry Up for Auction 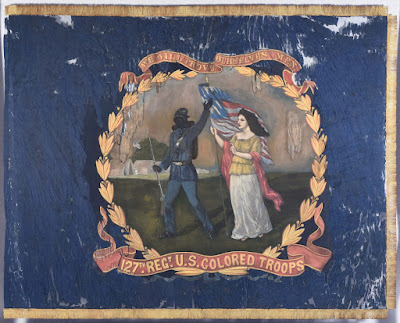 This wonderful flag is up for auction at Morphy Auctions this week. The 127th US Colored Infantry was an African American Civil War regiment, one of 11 raised in Pennsylvania immediately after the government authorized black soldiers. All of these regiments were mustered in and trained at Camp William Penn, which was set up outside Philadelphia on land belonging to Quaker abolitionist Lucretia Mott. The regiment was attached to the Army of the James in 1864 and did its part in the Siege of Petersburg, then joined the epic march to Appomattox; the rapid flank march of the Army of the James blocked any possible retreat for Lee's Confederate army, forcing their surrender. 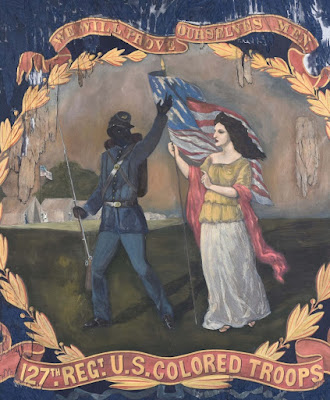 The flag was designed and painted by Philadelphia portraitist David Buster Bowser, the son of a runaway slave. Buster did the flags for all 11 Camp William Penn regiments, but this is the only one known to survive. The motto, We Will Prove Ourselves Men, tells you a lot about why African Americans volunteered to serve in the war. Other Bowser flags bore the mottoes "'Rather Die Freemen, Than Live To Be Slaves," "Let Soldiers in War Be Citizens in Peace," and "Sic Semper Tyrranis," the last accompanied by an image of a black Union soldier bayoneting a Confederate.

The estimate is $150,000 to $250,000. I hope the purchaser is a museum; the auction house's announcement practically begs the Smithsonian to buy it.

The flag was bought by the Atlanta History Center.
Posted by John at 7:54 AM