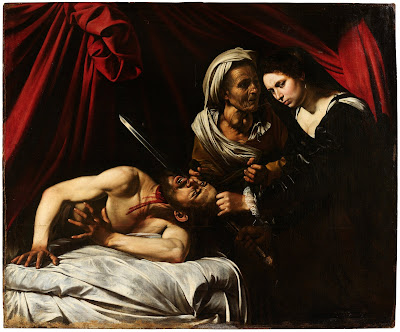 This painting, known as the Toulouse Caravaggio, is to be auctioned off next week in France; whether it will fetch the $100 million price the sellers are hoping for depends on whether anyone with that much money believes it is a real Caravaggio. 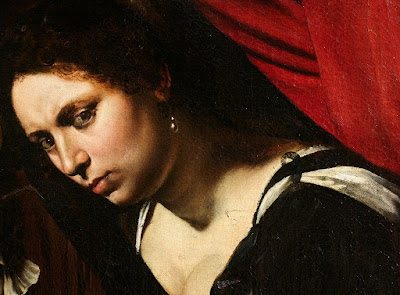 The sellers think that this is a known but lost painting, of which a copy survives painted in the 17th century by one of Carvaggio's acquaintances. That lost painting was done in Naples around 1607. The Toulouse painting does have the look of a Caravaggio, and Judith is obviously his favorite female model, the courtesan Fillide Melandroni. 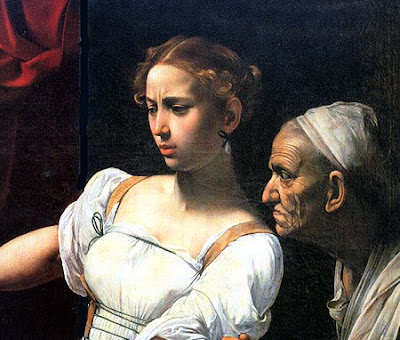 Compare Caravaggio's other painting of the same scene, done in Rome in 1598. 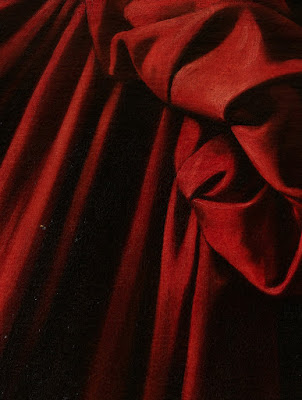 Caravaggio had a thing for red drapery, and the drapery in the Toulouse Caravaggio looks like his. 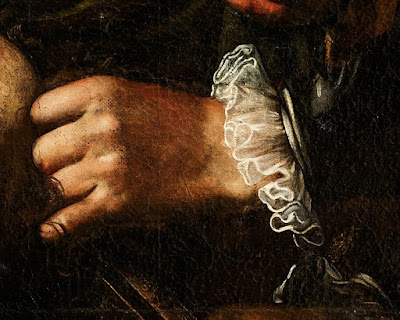 So does the detail on this cuff.


“Look at the execution of the lips, the way the chin and eyelids are painted,” said Mr. Turquin, pointing at the face of Judith, challenging the viewer with her gaze as she coolly decapitates Holofernes with his own sword. “It belongs to Caravaggio. How could it be by anyone else?” 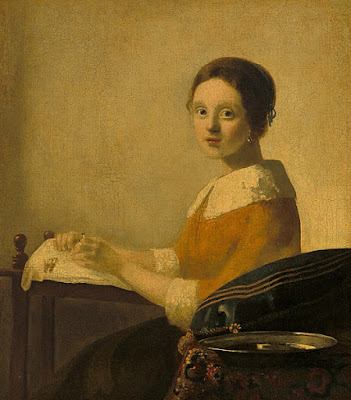 And to that I say, balderdash. To see why you have only to consider the career of the famous forger Han van Meegeren. Van Meegeren was a Dutch painter who in the 1920s and 1930s created dozens of fake old master paintings, most spectacularly ten fake Vermeers. Experts, some of them extremely well educated and sophisticated, proclaimed these to be authentic masterpieces. In fact when Van Meegeren, in prison facing charges of collaborating with the Nazis, revealed the fraud, some of the curators who had bought his paintings refused to believe him. Van Meegeren actually did collaborate with the Nazis, but he got off by revealing that he had sold one of his fake Vermeers to Goering for a huge sum, which made him a Dutch folk hero for a while. (He still is a folk here in some corners of the internet, but he was both a Nazi and a crook.)

Actually the weird thing to me about van Meegeren's career is that his fake Vermeers don't look anything like real ones to me; consider the comparison above, Vermeer on the left and van Meegeren on the right. The van Meegeren looks to me like a painting from the 1930s.

And there were people who spotted this, but enough experts were taken in that van Meegeren became a very wealthy man. Connoisseurship simply cannot be trusted. 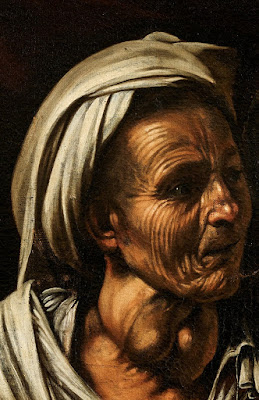 The experts who are most skeptical about the Toulouse Caravaggio point to the face of the servant. This is both clumsy and anatomically dubious, and Caravaggio, like most Italian painters of the 16th and 17th centuries, was obsessed with showing how faces actually convey emotion. Of course it might be that the master did most of the painting but left some details to an assistant, but this face seems prominent to me.

So I'm against. But then my Connoisseurship isn't reliable either.
Posted by John at 8:07 PM