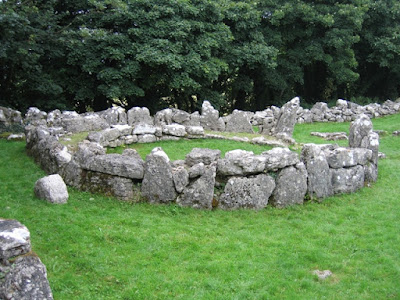 Din Lligwy is a walled settlement on the Isle of Anglesey in Wales, dating to Roman times. 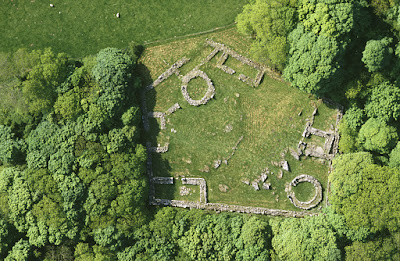 The complex contains two round houses and at least four rectangular buildings; it measures about half an acre (1850 square meters). 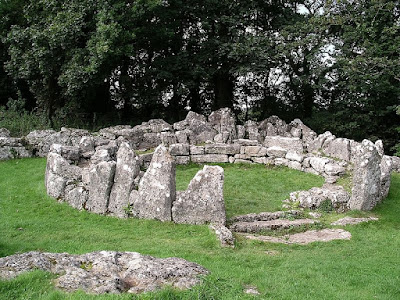 The limestone walls of the structures stand in places five feet (1.5 meters) tall, which may be close to their original height. 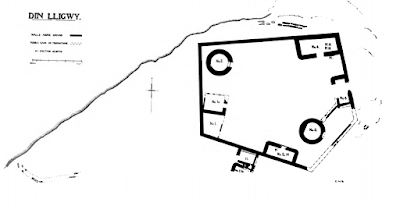 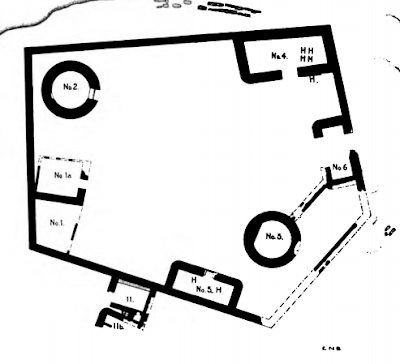 The site was excavated in 1905-1907 by the Cambrian Archaeological Society, and as it happens the original 1908 article reporting their discoveries is online. The most interesting thing about the plan above is all the features marked H, which were small stone-lined hearths perhaps used for smithing or smelting iron. 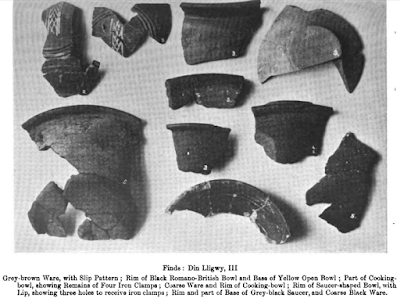 Among the finds were more than a hundred sherds of Romano-British pottery, as well as some imported from Gaul, and quite a big of slag, that is, the waste from smelting iron. The sherds dated the site to the 3rd and 4th centuries AD. 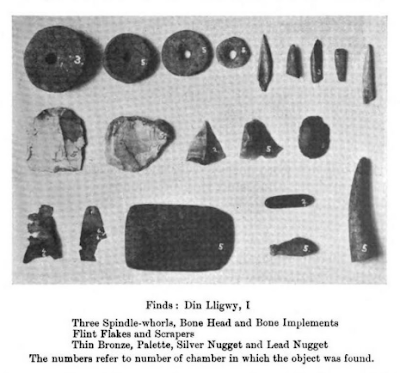 Other artifacts included spindle whorls, loom weights and a birdbone flute. A couple of small flint artifacts were found, and numerous waste flakes from working flint. It is important to remember that even in Roman times, when iron and bronze tools were common, people still used stone for many tools; this actually continued into the 20th century in poor rural parts of Europe and the Middle East. 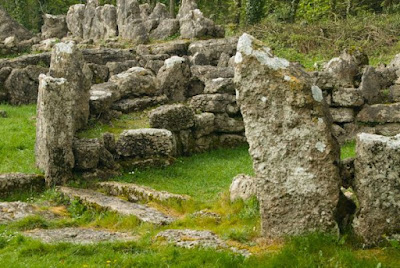 Besides being a center for iron working, this was probably the residence of a local chief:


Jacquetta Hawkes in A Guide To The Prehistoric And Roman Monuments In England and Wales, says of this site that: “Within a stout enclosure wall, there is a group of houses, two of them circular, but the rest rectangular in plan and all spacious, splendidly built and almost intact. Nearly all the walls show a massive construction with an inner and outer facing of large slabs and a packing of smaller stones. Din Lligwy shows signs of having buildings of more than one period, but it is known to have been inhabited during the Roman occupation down to the fourth century A.D.; it must surely have been the stronghold of some chieftain of unusual standing—one would like to think that the lord himself lived in the larger round house, a place quite worthy to rank as a Celtic palace.”

Since the inner diameter of that larger house is 21 feet (6.4 m), you can see that Celtic chiefs did not live in very luxurious homes. 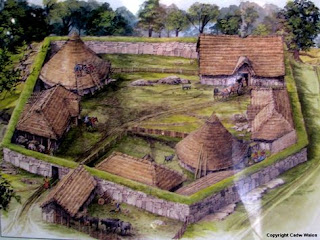 Look closely at the larger version of the site plan above and you can see that the site once had walls enclosing a larger area. This, along with scattered finds of pre-Roman artifacts, suggests that the site existed in earlier times, but if so hardly anything has been learned about it. 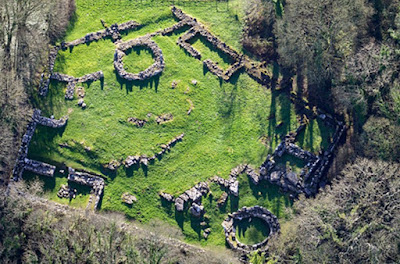 People say it is a wonderfully evocative site, so think about a visit if you ever find yourself on Anglesey.
Posted by John at 12:28 PM