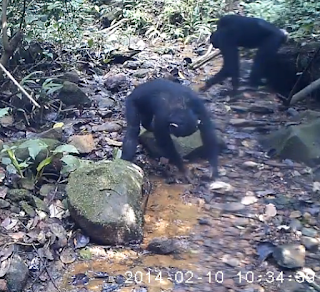 New article in the Journal of Human Evolution by Kathelijne Koops et al.:


The significance of aquatic food resources for hominins is poorly understood, despite evidence of consumption as early as 1.95 million years ago. Here we present the first evidence of a non-human ape habitually catching and consuming aquatic crabs. Chimpanzees (Pan troglodytes verus) in the rainforest of the Nimba Mountains (Guinea) consumed freshwater crabs year-round, irrespective of rainfall or ripe fruit availability. Parties of females and offspring fished for crabs more than predicted and for longer durations than adult males. Across months, crab-fishing was negatively correlated with ant-dipping, suggesting a similar nutritional role. These findings contribute to our understanding of aquatic faunivory among hominins. First, aquatic faunivory can occur in closed forests in addition to open wetlands. Second, aquatic fauna could have been a staple part of some hominin diets, rather than merely a fallback food. Third, the habitual consumption of aquatic fauna could have been especially important for females and their immature offspring. In addition to providing small amounts of essential fatty acids, crabs might also be eaten for their micronutrients such as sodium and calcium, especially by females and young individuals who may have limited access to meat.

Video here. Notice that the chimps are grubbing under rocks in a very small stream, so this is not what many people would expect under the category of "fishing."
Posted by John at 10:39 AM

Notice that the chimps are grubbing under rocks in a very small stream, so this is not what many people would expect under the category of "fishing."

And many people expect when you say "hunting" that you mean taking a gun and going off to shoot at deer or similar, even though you can hunt with your bare hands, as chimpanzees also do.

People in general have bad habits of viewing the world through the lens of the familiar, rather than that of conceptual essence. It's why some people get up in arms over things like he notion that a hot dog is technically a form of sandwich - they struggle to recognize the conceptual truth beyond the limits of their own experience.