Covering Up the Murals at George Washington High 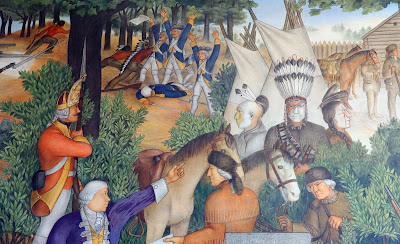 George Washington High School in San Francisco hosts a series of 13 murals depicting the life of George Washington. These are not, however, the patriotic murals you may be imagining:


The works were created in the mid-1930s by Victor Arnautoff, a social realist, for the Works Progress Administration, an agency created under Franklin D. Roosevelt’s New Deal that provided public works jobs for the unemployed during the Great Depression.

Arnautoff, who was born in Russia and taught at Stanford, was a Communist who embedded messages critical of the founding father in his murals. He depicted Washington, accurately, at a time when that was rarely acknowledged, as a slave owner and the leader of the nation that annihilated Native Americans. There are no cherry trees. 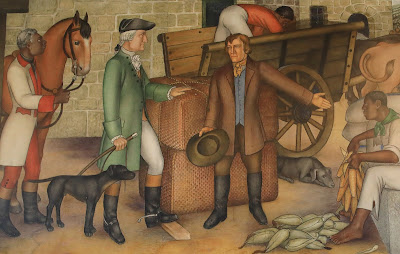 And yet the murals have been controversial since the 1960s, with all of the complaints coming from the left. In response to objections from black and Native American students, the San Francisco Board of Education just voted to remove them. 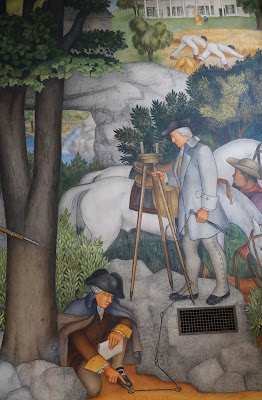 
Virginia Marshall, president of the San Francisco Alliance of Black School Educators said Arnautoff’s paintings remind her of “my great-great grandfather and great-great grandmother who were beaten and hung from trees and told they were less than human.”

Paloma Flores, a member of the Pit-River Nation and coordinator of the school’s Indian Education Program, said Arnautoff’s “intent no longer matters.” The murals “glorify the white man’s role and dismiss the humanity of other people who are still alive,” she said.

Above is the most controversial of the 13, showing Washington pointing a gang of settlers westward over the dead body of an American Indian. 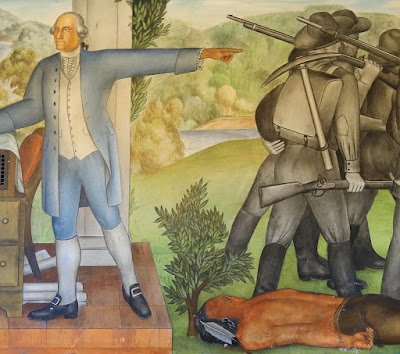 I am reminded of many other similar controversies, like the one over the Ann Rice O'Hanlon's mural in the University of Kentucky student center that we talked about here before. Or an older controversy that forced the Library of Congress to take down an exhibit about plantation life; people objected in particular to a photograph that showed a mounted overseer looming over a slave working in a cotton field. In all of these cases the real objection is that the images depict the past as it actually happened.

Nobody is saying that these images are not accurate, or that they omit minority groups, or that they ignore the human cost of Manifest Destiny or any of that. Settlers marching west over Indian bodies is, if you ask me, an entirely fair depiction of what took place. No, the problem is that they clearly show the dark side of our history. This raises the question: is it possible in America to bring that past into our public sphere? As I said about the UK mural, thinking that we need to remember slavery and what was done to the Indians does not necessarily imply that we should have a mural about it in the lunch room.

But what sort of public art can we have in America? Consider:


Joely Proudfit, director of the California Indian Culture and Sovereignty Center in San Marcos, said it is not worth saving the art if one native student “is triggered by that.”

What sort of monument wouldn't trigger somebody? The only way to avoid giving offense is just to ignore the whole problem. We're going to end up with hundreds of murals that show happy people of every ethnicity going about happy lives, as if we did not live on blood-soaked soil, as if we had never tried to slaughter each other. Is that the right answer?
Posted by John at 8:09 AM

Your blinkered view of American culture appalls me. At one level this is simply bad art of the 1930s. (A similar mural in Grace Cathedral, SF, shows California Indians of the 1780s with perfect "six-packs" -- never ate a carb, apparently!) But what was permitted to be painted AND DISPLAYED in the '30s was social realist art in support of the narrative of the White Patriarchate. Nelson Rockefeller understood this perfectly when he ordered Diego Rivera's (highly accurate) depiction of forces at work in the 20th Century for Rockefeller Center brutally destroyed. It did not support his wealthy, white, capitalist male narrative.

Well, guess what John? Narratives change. And the patriarchal "winners" of yesteryear bemoan their passing. . . .

In case you have an interest in expanding your point of view beyond the white parochial, I recommend a "crash course" in the work of Kara Walker. Do you a world of good, it would . . . .

Kara Walker is ok. But I guarantee you that if you tried to put the first image in this set https://art21.org/gallery/kara-walker-artwork-survey-2000s/ in a public place many black people would protest.

Some people simply do not want to see images of white people dominating black people, full stop. They do not want to be reminded of slavery. No amount of art will change that.

The Library of Congress exhibit I mentioned before included several pieces of art by black artists, but that didn't help.

"What sort of monument wouldn't trigger somebody? The only way to avoid giving offense is just to ignore the whole problem. We're going to end up with hundreds of murals that show happy people of every ethnicity going about happy lives, as if we did not live on blood-soaked soil, as if we had never tried to slaughter each other. Is that the right answer?"

Here's a question - why do we even need these kinds of monuments? Is history going to shrivel up and die if we don't have historic murals at high schools?

The point of a public monument is to send a message to the public. If that message offends various populations in our multi-cultural society, don't we have the responsbility to ask why we're trying to send that message, and whether giving offense (intentionally or not) is worth sending that specific message in that specific way?

Public works must be more or less acceptable to everyone who makes up the public. And I'm sorry, but the public generally doesn't want to be reminded of our "blood soaked soil" - they'd rather look to a hopeful future, rather than contemplate the brutality of the past.

We're talking about a public high school, for crying out loud. This kind of art isn't remotely appropriate for that setting. Put it in a museum, where people can choose to visit and view it if they wish - not in the middle of a busy school hallway or stairwell, where young students have to pass it every single day and have no choice but to see it.

Kids trying to navigate the chaos of mere teenage life don't need to also be forced to confront the blood soaked soil of the past every time they change classes or go the bathroom. If and when they want to confront the brutal past, they can do so by visiting a library and reading a book, or by visiting a museum and seeing these murals in a curated installation with placards and screens providing context. The rest of the time, they should be able to just be kids attending school.

@G - all that you say is true; that's why I haven't taken any position on whether the murals should stay.

But many on the left want Americans to be confronted with the bad stuff about our past. They are constantly pushing us to reflect on things like slavery, the slaughter and expulsion of Native Americans, the violent struggles of the labor movement and the perfidy engaged in by capitalists putting labor down. They see this reflection on our dark past as a crucial background to achieving justice in the present.

How can that be done without exposing the public to images that are going to offend many people? What is lost when these murals are painted over is a chance for talking about the other side of America's founding. Do we want to do that or not? Maybe we don't. Maybe sweet murals depicting happy people of every ethnicity are the way to go. But that means giving up on the program, so dear to many on the left, of forcing conversation on exactly these issues.

One is the fairly obvious point that the children (apparently, relatively few in number) who do find this art triggering are in fact being true to the artist's vision. It was certainly no part of his intent that these paintings should be contemplated with pleasure. And the triggered children and their adult champions are, after all, rebelling in some sense (and one of the councilors who voted for destruction said it would be a form of "reparations"). The artist would probably have despised those who want to defend the paintings purely as acts of artistic creation, or as interesting historical artifacts.

The other is that, overall, the interest in talking over and teaching the record of colonialism, slavery, capitalist exploitation, etc., is in significant part a debate the elite (especially the white elite) is having with itself about what sort of elite it should be. What a lot of the minority leaders that John is talking about want is encouragement and opportunity for their own children to join the elite; agonizing over what that means morally and culturally is something their children's children can indulge in, once their parents have made it.

A weekend off makes THIS "leftie" more belligerent than ever at the well-heeled conservative snowflakes who flinch from a dialogue about America's past after we have labored publicly for 150 years under the heel of the "bronze horsemen" Robert E. Lee, Sam Houston, Stonewall Jackson &c. Please tell me they weren't designed to choreograph a message -- every bleedin' day.

You may shirk from debating in bronze, stone and paint, but a helluva debate is still warranted.

Happy Fourth All! See you on the mall for Trump and the conservative tonton macoute!

Do you mean "minority activists" (big dog whistle there, David!) as opposed to those "passivists" who just collect their pensions, read David Brooks approvingly, and blog nonsense?

You're right about my use of the "minority activists" phrase, which came out ugly, and which I regret. My goal, such as it was, was to echo what I understood to be one of John's original points, which was the irony that the very sort of folks that Arnautoff would seem to have thought he was on the side of, are the ones who want to destroy his mural. My impression was that John's interest was to highlight the curious way leftism seems to have changed since Arnautoff's day.

Would it be fair to say that, in your view, the sort of people who make intellectual observations about things like the irony of historical change (and who, like me, use chin-stroking, at-my-ease phrases like "would it be fair to say that"), are contemptible elitists who, in effect, side with the forces of evil, when they should be sputtering mad and hefting bricks for throwing?