Another Lewis Chessman Turns Up 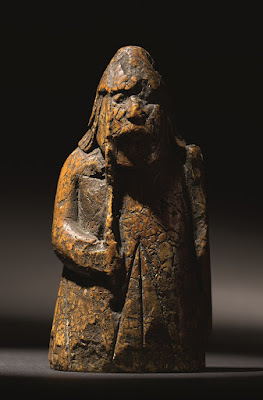 The set of the Lewis chess men in the British Museum has always seemed incomplete. It comes close to being four complete sets, but it falls short, for example there is only one knight. Since the circumstances of the discovery and original 1831 sale remain murky, people have long  wondered if there might be more of them out there somewhere:


A Lewis Chessman whose whereabouts, nay, very existence, were unknown for almost 200 years has been identified and will be sold at auction next month. Picture it: the Isle of Lewis, Outer Hebrides, April, 1831. There, on the inlet of Uig Strand, a hoard of 93 objects was unearthed under nebulous circumstances that quickly became more legend than fact. It was a collection of 93 chessmen, pawns and tablemen (circular game pieces), plus one random belt buckle. That’s enough for almost four complete sets of figure pieces. Most of them were carved out of walrus ivory, likely in Trondheim, Norway, in the 12th or 13th century.

Whatever the true story of their discovery, the Lewis Chessmen made their international debut at the Society of Antiquaries of Scotland in Edinburgh in 1831. A merchant named Roderick Pirie was the first named owner. He sold them to an Edinburgh dealer for £30. That dealer sold 10 of them to antiquary and artist Charles Kirkpatrick Sharpe, and 81 of them to Frederic Madden, Assistant Keeper of Manuscripts at the British Museum. Sharpe was able to acquire an 11th piece after his original purchase. Today, Sharpe’s chessmen are part of the collection of the National Museum of Scotland in Edinburgh. The British Museum has a total of 82 of the original 93 pieces. . . . 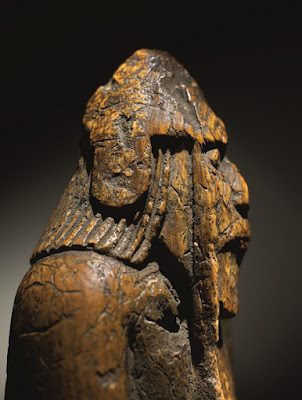 And so to the present day:


For the first time a new Lewis Chessmen Warder has emerged. It was bought for £5 in 1964 by an Edinburgh antiques dealer. He did not realize the treasure he had found. It has been his family ever since, beloved, even revered as an artifact with almost magical properties. His grandchildren, who prefer to remain anonymous what with having hit the antiquities lottery and all, took it to Sotheby’s for appraisal.

Imagine that you're behind the appraisal desk at Sotheby's as a long line of people bring in ugly old paintings and fake jewelry and what all. And then somebody hands you one of the Lewis chess men. Gulp.

The piece will be auctioned off on July 2, but you have to assume that the government will declare it a National Treasure and allow the Royal Museum of Scotland to match the winning bid. 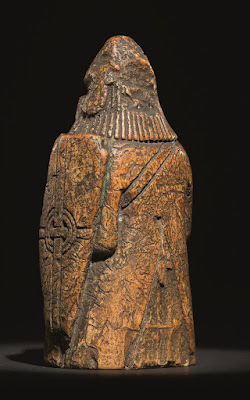 Now where are those missing knights?
Posted by John at 7:28 AM

The piece will be auctioned off on July 2, but you have to assume that the government will declare it a National Treasure and allow the Royal Museum of Scotland to match the winning bid.

I wonder, are they going to give Norway an equal chance to bid? Surely the Norwegians have just as much of a claim to it being a "national treasure", since the consensus is that it originates from there?

Funny, the logic of nations and ethnicities. It's almost as if history actually belongs to everyone, but our nationalistic mindset disservices the overwhelming majority of the globe to benefit only those who happen to meet abritrary standards related to the accidents of their own births.