The Adaptive Power of Culture and our Fondness for Tradition

Anthropologist Joseph Henrich has a new book called The Secret of Our Success, and Scott Alexander has both a long review and a whole post of long quotations. Since Henrich is an anthropologist, you can easily guess what he thinks is the secret to human success: culture. Our brains, unaided, are pretty cool, but what makes us the dominant large species on the planet is our ability to accumulate and share knowledge. 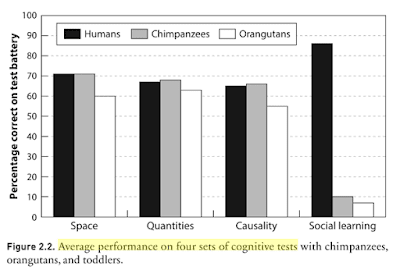 I love this graph, which so nicely brings out what we are best at. At most cognitive tasks human toddlers are on par with apes, but when it comes to learning from others we blow away every other animal. This is what we do well: learn.

Learning of course has two sides, the learning and the teaching. Cultures all make concerted efforts to pass onto the next generation whatever they think is important. But how do they decide what is important? This is a fascinating puzzle. Some traditional knowledge strikes us as extremely useful, but other parts seem silly. One of Henrich's main arguments is that we preserve a lot of strange cultural rules and the like because it is very hard, in fact often impossible, for any single person to figure out which parts of the culture are important and which are not. Henrich has many illustrative examples, one of which concerns raising pigs. In the New Guinea highlands raising pigs is a supremely important activity, since the prestige of a community is tied up in how many pigs they can serve to guests at important feasts. In 1971 anthropologist David Boyd visited the village of Irakia and found the community immersed in a debate about how to fix their own lagging pig production. It is proposed, and eventually adopted that they should "follow the Fore," that is, adopt the pig-raising techniques of the Fore people, who have lately been very successful in this department. Here is the actual list of measures adopted by the village:


1) All villagers must sing, dance and play flutes for their pigs. This ritual causes the pigs to grow faster and bigger. At feasts, the pigs should be fed first from the oven. People are fed second.

2) Pigs should not be killed for breaking into another’s garden. The pig’s owner must assist the owner of the garden in repairing the fence. Disputes will be resolved following the dispute resolution procedure used among the Fore’.

3) Sending pigs to other villages is tabooed, except for the official festival feast.

4) Women should take better care of the pigs, and feed them more food. To find extra time for this, women should spend less time gossiping.

5) Men must plant more sweet potatoes for the women to feed to the pigs, and should not depart for wage labor in distant towns until the pigs have grown to a certain size.

We look at this list and think that some of it is highly relevant and some is not. But how do we know? The people of Irakia presumably know a lot more about raising pigs in New Guinea than any of us, so why do we think we know that, say, playing music to pigs does not help them grow? But anyway the point is that the Fore way of raising pigs was adapted en bloc because that is just how people work most of the time. The thousands of particular actions that make up something like hunting deer or growing potatoes or holding feasts are rarely scrutinized in themselves; they are part of the way, and if the way is good, if the way is working, then we keep doing all of them.

So when you ask, why do people cling to ideas that strike you as outmoded, from an anthropological standpoint the question answers itself: because cultures that passed on their ways of doing things survived, and those that did not have disappeared. You may think that you can reason your way to improvements, but this is a particularly modern outlook that would have seemed bizarre of most humans of the past, and anyway you are probably wrong. (See: communism, libertarianism, etc.)

Life, even in a neolithic village, is simply too complex for any person working alone to reason out a better way of living. So we evolved a very strong attachment to old ways.

I think the best way to see all the weirdness of the modern world is through this lens. We have created so much change, so fast, that clinging to old cultural ways no longer makes sense in many, many areas. This has unmoored us and left us floundering about, prey to ideologies that offer something solid to take the place of tradition. But this is illusion; the world is too complex for ideology, just as it is too complex for reliance on tradition. So we suffer from anxiety and rage and all the other modern diseases.

I should say that I think this picture is highly simplified; along with our general attachment to tradition we humans also have a thirst for novelty that is in some of us extremely strong. After all cultures do change, even the most traditional. But for most of our history they changed very slowly because that was the best guarantee of survival, and our poor brains, which evolved for the slow pace of peasant life, are at sea in this crazy modern world we have devised.
Posted by John at 8:50 PM

Very interesting post. (Indeed, I was interested enough that I checked, and Henrich's book is available on Audible.)

I would add that Henrich's argument, or at least Alexander's version of it, also seems radically simplified in that clearly a lot of culture is passed down, not for pragmatic purposes or or perceived pragmatic ones (in the sense of interaction with the non-human world, singing to the pigs and such), but purely with an eye to how humans interact with each other--that is, for social reasons (especially avoiding the angry pushback, or even just the disapproval, of other humans). Thus people accept deference to hereditary rulers or the upper castes or dominant ethnicities or whatever because resisting that is socially risky, in specific and personal and even physical ways, but also in general and psychological ways that have to do with identity and emotion.

In this sense, perhaps we should bring together Henrich as depicted here with Yuval Harari's argument in Sapiens that what distinguishes humans is their ability to work together based on shared fictions about identity, morality, the cosmos, etc.

At the same time, this means that culture-maintenance is also about issues like social status and one's sense of self and the universe. It also means that social and political conflicts often run deeper than simply the world is big and complex and hard to figure out. As an example, consider that, while the Irakia were happy to adopt the ways of the Fore, whole-hog, other cultures' basic message is "keep to the old ways, all of them, no matter the cost, because not doing so is evil"; Brahminism, Salafism, and Orthodox Judaism all partake of this in very obvious ways. And there's a determined and devoted psychological quality there that seems to me to go beyond the life-is-complex model.

One could add, of course, that many movements that want change have the belief, "adopt the new ways, all of them, because not doing so is evil."

I suppose one could say that the "life is hard and so it shouldn't be too hard for us all to chill out" message is a kind of fiction, on the Harari model, that might have beneficial pacifying effects on our current political struggles. And since we must have fictions, why not that one? But at the moment I have trouble seeing beyond the fiction in the fiction.

Where this seems most powerful to me in interpreting contemporary life is in the weird hodgepodges of stuff that make up a culture. Conservatives defend things that seem to me important (morality, responsibility, respect for the Constitution), things that at least seem serious to me (churchgoing, the nuclear family), and things that strike me as utter nonsense (high school football and cheerleading). Henrich says this is because a person of conservative mindset is prone to seeing everything he or she grew up with as equally important and therefore insist on preserving all of it. As David hints, leftists do the same. In fact the striking thing about politics in America is that more and more people are accepting all of their party's tenets, as if being a Republican or Democrat were as all encompassing as being an Orthodox Jew. Thus people are constantly insisting on connections that strike me as wholly imaginary. People who write for Salon like to argue that socialism would necessarily lead to equal right for women and minorities, while at RedState they think socialism would necessarily lead to crime and family breakdown.

I would push back on the power of Henrich to explain things like why Republicans defend both their version of the Constitution and cheerleading. It seems to me the connection of high school football and cheerleading and other Republican values is obvious: they're about traditional gender- and person-definition--and not in a mysterious or singing-to-the-pigs kind of way. Republicans defend football and cheerleading because they love them, because they're the ways of being male and female and for both to be sexy that they like, and for many other reasons (including, let's face it, their particular vision of racial harmony: black players can be famous, important, rich, lionized--but always ultimately subordinate to the white quarterback or coach).

In other words, it's not just they take everything they grew up with and preserve it as a whole. It's much deeper and richer than that.

Henrich, as presented by Alexander, simply seems weak on issues of psychology and identity. (I'm not surprised that Alexander would present a thinker in such a way; I've never gotten over the way he simplified, in an insidious and pejorative way, the Sunni-Shi'ite conflict. His point was, look at these funny people whose real, silly motives I can spot and explain.)

And all this is, of course, not to mention that liberals have their own versions of morality, responsibility, and respect for the Constitution. All that stuff tends to saturate the liberal posts I've read. In fact, a good deal of Trumpism seems to me to be about being tired of liberals prating about morality, responsibility, and respect for the Constitution. Trump's pugilistic populists (in Douthat's magnificent phrase) wanna cut loose and kick ass.