The Geefs Brothers and the Devil of Liege 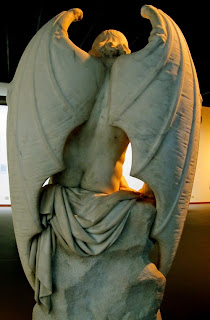 Once upon a time there as a whole family of Belgian sculptors named Geefs. One of them, Joseph Geefs, was commissioned by the Bishop of Liege to create a sculpture of a fallen angel for the newly restored pulpit of his cathedral.

Geefs delivered this, now known as L'ange du mal. A perfect expression of the Romantic fascination with evil that blossomed forth in Frankenstein, Dracula, and the Fleurs du mal, it has been called one of the most disturbing sculptures of the age. Of it wikipedia says,


The commission was originally awarded to Joseph Geefs, who completed L'ange du mal in 1842 and installed it the following year. It generated controversy at once and was criticized for not representing a Christian ideal. The cathedral administration declared that "this devil is too sublime." The local press intimated that the work was distracting the "pretty penitent girls" who should have been listening to the sermons. Bishop van Bommel soon ordered the removal of L'ange du mal, and the building committee passed the commission for the pulpit sculpture to Guillaume Geefs, whose version was installed at the cathedral permanently in 1848.

Although Joseph Geefs lost that prime spot in the cathedral to his older brother, he made up for it by exhibiting his sublimely wicked angel at salons across Europe, where it divided critics but earned him several orders for copies. 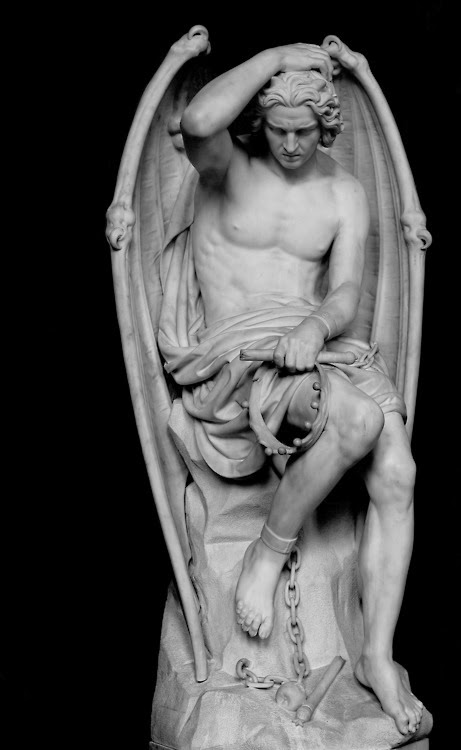 So it was then the turn of the more famous older brother, Gillem or Guillaume. He delivered this chained angel, now called Le génie du mal, the Genius of Evil. Sadly, I don't think this was any less of a problem. If it was a bit less of a distraction for those pretty penitent girls, it was probably more so to their mothers.